You are at:Home»Current in Carmel»Carmel Community»Carmel Police Department: Who is Tim Green? 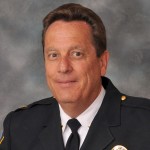 The city of Carmel has seen explosive growth in all areas the last 25 years. Population alone has swelled from around 25,000 in 1990 to more than 80,000 residents today.

Keeping pace with that rapid expansion is difficult for any of the city’s services, not the least of which is the Carmel Police Department. In this, the final segment of a four-part Current in Carmel series talking with the men who have served as chief of police since Carmel became a city in the mid-1970s, the present chief discusses his leadership.

Tim Green is the present Carmel police chief, assuming the position in 2011. He heads a department of nearly 140 police officers and civilians – quite a change from when Jim Beard (Carmel’s last town marshal and first police chief from 1968-1974) had four on the force and a single car in a cramped little office in the late ‘60s. Most on his staff are in it for the long haul, Green said, averaging 25 years or more with the department.

Green also pointed with pride to the department’s national reaccreditation in 2013 as a highlight of his term.

“Getting the reaccreditation acknowledges that we are still considered to be a department that operates on the established best practices across the country,” he said. “Without that dedication and commitment of the police officers and civilian employees, we wouldn’t be able to be the respected department that we are.”

A Carmel PD member for 33 years, Green worked alongside nearly every one of his predecessors and understands well the legacy they have left.

“Each chief that’s come along has wanted to modernize and stay up with technology and promote the continued training and continued professionalism – all these things that have made us into the agency we’ve become,” said Green, 55. “You’re part of not just maintaining that, but I’ve learned from other chiefs that you need to continue to build upon that.”