You are at:Home»Current in Zionsville»Local photographer ‘makes gold’ 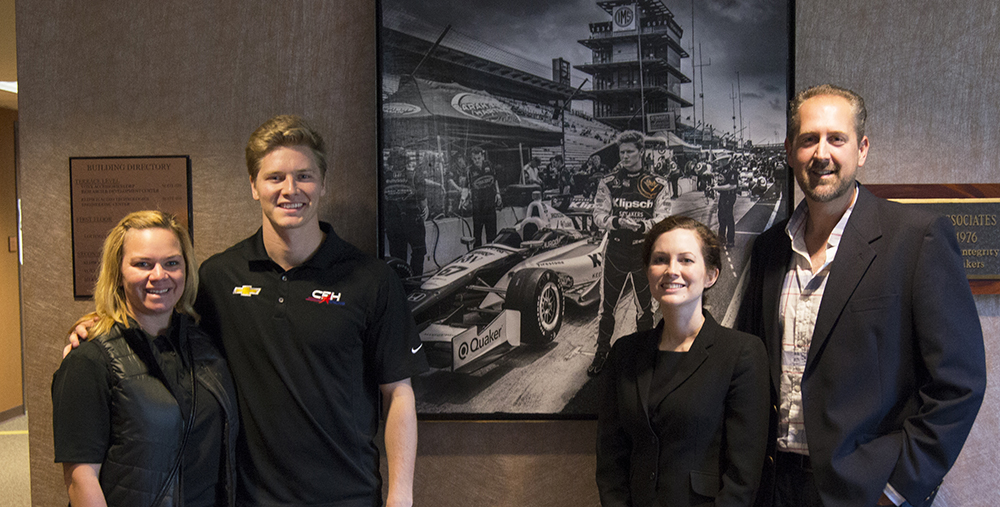 “You don’t take a photograph, you make it.”
― Ansel Adams

Adams’ quote is exactly true for local photographer Chis Bucher on his latest shuttering achievement; a gold-medal winner of the National Museum of Sport’s International Fine Art Competition in its photography division.

Bucher captured the photograph for Klipsch during qualifications for the inaugural Grand Prix of Indianapolis that took place at the Indianapolis Motor Speedway in May.

And the photograph wasn’t taken. It was made just like most good photographs are with many different elements beyond any photographer’s control. And Bucher’s award winning photograph developed out of a marketing project by Klipsch, a global speaker and headphone manufacturer.

“We were supposed to shoot a big production for this campaign with Joe,  on the yard of brinks, lighting the track, storm clouds in the background, it was going to be a large shoot,” Bucher said. “We never even had a window of time to do it due to weather.”

So Bucher said to Matt Sommers, vice president of marketing and creative strategies for Klipsch, that is would be bad for them to let this opportunity to slip by.

“I proposed to shoot it like a media sports editorial type photograph, all in black and white, authentic. not set up or staged,” Bucher said. “This wasn’t the plan so I gave Joe direction and shot him in front of his car, shot four or five frames and that was it, literally 30 seconds before he put his helmet on to drive for qualifications.”

“Chris’ photograph candidly depicts the power and performance of both Klipsch and CFH Racing,” said Matt Sommers, vice president of marketing and creative strategies for Klipsch.

“Shooting this rising star in the IndyCar world in front of his car, surrounded by the controlled chaos of the crew while prepping for qualifications brings light to the excitement and death-defying challenge inherent in motorsports,”  a three-time gold medalist in the NAMOS annual competition photographer said. “Newgarden’s lighthearted charisma coupled with steel-hearted determination certainly helped make this photo.”

The internationally acclaimed and award-winning photograph was unveiled as a permanent installation at Klipsch corporate headquarters earlier this month. On hand for the unveiling of Bucher’s photograph was Josef Newgarden, along with team co-owner Sarah Fisher and Elizabeth Varner from the National Museum of Sport.

And people are what inspires Bucher’s photography.

“I’ve taken a lot of photos of people, in all areas of life, and they inspire me to show them who they really are in a moment in time,” Bucher said.