You are at:Home»Current in Carmel»Carmel Community»Cooking up a cure for breast cancer 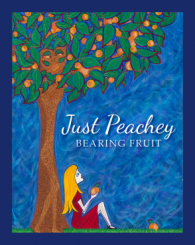 The cover of “Just Peachy,” a book being sold to raise money for cancer research. (Submitted photo)

October is national Breast Cancer Awareness month, and one local group is helping people raise money to fight this disease one cookbook at a time.

The Catherine Peachy Fund is selling the 20th anniversary edition of their cookbook, “Just Peachy: Bearing Fruit.” The cookbook features 500 recipes from an array of cooks, including international chefs, celebrities, and local friends and family members of those affected by breast cancer. One hundred percent of the proceeds from the book go towards breast cancer research at Indiana University.

Director of the “Just Peachy: Bearing Fruit” cookbook, Stephanie Rufenbarger Lesher, has been working with a team made up of volunteers in Carmel to produce and publish this special edition of the cookbook. Rufenbarger Lesher’s mother, a two-time breast cancer survivor, was the director of the first book nearly 20 years ago which sold 57,000 copies.

Now, Rufenbarger Lesher is carrying on her mother’s legacy, and along with the rest of the Just Peachy team, raising awareness and money for breast cancer research in Indiana.

“Nearly everyone’s life has been touched by breast cancer in some way,” Rufenbarger Lesher said, which is why the Catherine Peachy Fund is so passionate about raising money for research at Indiana University in Bloomington.

“When someone buys a cookbook, they can know that 100 percent of the money is going to breast cancer research,” Rufenbarger Lesher said.

Since the book’s production team is entirely volunteer, there is no overhead. Not only that, but purchasers get a great product in exchange for their donation.

At the beginning of the cookbook is a set of pink pages with excerpts from the Mayo Clinic, containing information about health for breast cancer patients. Following these pages are the delicious recipes from a number of different contributors. Rufenbarger Lesher said her favorites include the gluten-free banana chocolate chip waffles and a chicken tortilla soup- just two of the 500 delicious options.

The cookbooks can be ordered online at the www.catherinepeachyfund.org or at Bright Ideas in Broadripple, located at 7425 Westfield Blvd.