You are at:Home»Current in Westfield»Obituary: George E. Sheets 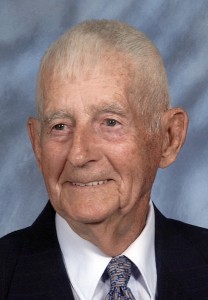 He proudly served his country in the U.S. Army under Gen. George S. Patton. He was in Company B – 83rd Medical Battalion Armored during World War II. He entered active duty in November 1942 and served in Central Europe Rhineland, including the Battle of the Bulge. He was wounded in Homburg, Germany, and received the Purple Heart. Other medals included the Good Conduct Medal, American Campaign Medal, and the European African Middle Eastern Campaign Medal. He was given an Honorable discharge on Oct. 29, 1945 from Camp Cooke, California.

He lived in Hamilton County most of his life, and had been a Westfield resident for 65 years. For 15 years, he worked at Sheets Implements in Westfield, and retired from Hare Chevrolet in 1980 as a mechanic after 22 years. He was a member of Village Park Bible Methodist Church, and enjoyed traveling, hunting, reading and boating.

Funeral services will be held at 10 a.m. Oct. 28 at Randall & Roberts Funeral Home, 1150 Logan St., Noblesville, with the Rev. John Parker officiating. Visitation is 5 to 8 p.m. Oct. 27 at the funeral home. Burial will be at Crownland Cemetery in Noblesville.

Memorial contributions may be made to Village Park Bible Methodist Church, 219 W. 161st St., Westfield, 46074. Online condolences may be made at www.randallroberts.com.