You are at:Home»Current in Zionsville»Rain barrels to be auctioned off next month 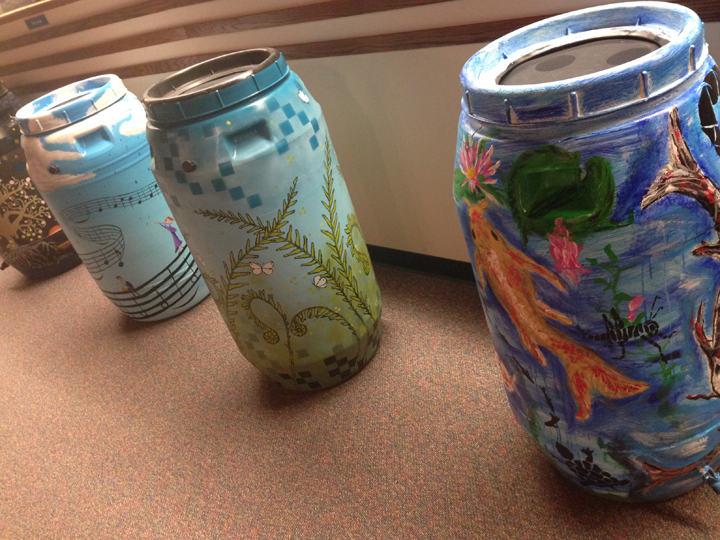 Rain barrels were decorated by local artists and will be available for purchase Nov. 8. (Photo by Sophie Pappas)

At the Oct. 6 meeting of the Zionsville Town Council, councilwoman Candace Ulmer introduced four of the 11 completed rain barrels that were decorated by local artists, in conjunction with the Zionsville Street and Storm Water Dept.

“A couple months ago, Gavin Marion our stormwater coordinator, approached SullivanMunce about working on rain barrel project,” Ulmer said. “It’s been a fantastic project of working with the stormwater department and the artists of our community.”

Director of the SullivanMunce Cultural Center Cynthia Young said after meeting with Marion, she knew this was a project she wanted to get behind.

“Using social media, the rain barrels that we had available for painting were snatched up pretty quickly,” Young said.

Young said that within an hour of posting the idea on Facebook and Twitter, all of the rain barrels were spoken for by artists, and now she has a waiting list for the next round of rain barrel decorating.

“In the future, we could even have school groups and families participate,” Young said.

“The town holds a permit… to control our stormwater runoff,” he said. “Obviously many people get fliers and hear about the benefits of rainwater barrels. This is a program that we modeled after a program in Cicero, and it really involves the public. It’s our goal to heighten awareness of stormwater management practices.”

Rainwater barrels can be used to collect and store rainwater runoff, typically from rooftops via rain gutters. Stored water may be used for watering gardens, agriculture, flushing toilets, in washing machines, washing cars, and also for drinking.

“Mostly it’s for conservation,” Lantz said of the barrels. “We think we’ll be able to pull off our second year next year.”

Between 10 a.m. and 4 p.m. Nov. 8, the 11 barrels will be auctioned off inside the Community Room of Town Hall. This will be a silent auction, and all proceeds will benefit the Zionsville Cultural District.