You are at:Home»Current in Fishers»Award-winning chocolate at Fishers Farmers’ Market 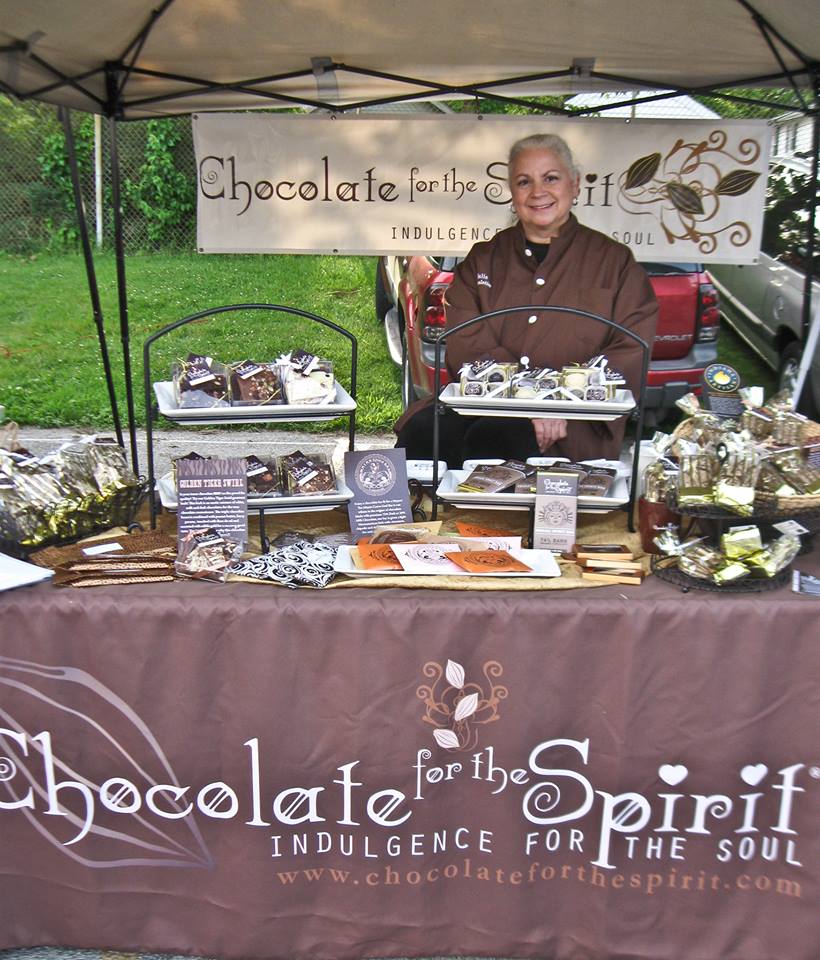 Chocolatier Julie Bolejack has won numerous awards, including international awards, for her chocolate. It is for sale weekly at the Fishers Farmers’ Market. (Submitted photo)

An Indiana gourmet artisan chocolatier who has sold her products at the Fishers Farmers’ Market for the past three years recently won international recognition. Chocolate for the Spirit owner Julie Bolejack won two bronze medals for her Mayan Spice Bar. One medal was in the “most unique” category and another was for “best ingredient combinations.” The awards were handed out by the International Chocolate Salon, which holds a number of product-specific competitions in four venues around the world, annually naming the best toffees, caramels, truffles, chocolate beverages and more.

Bolejack says her company only uses the best chocolate.

“Chocolate for the Spirit is a gourmet artisan chocolatier – specializing in using some of the world’s best chocolate, including the World’s Rarest featured on Anthony Bourdain’s CNN show, Parts Unknown. A chocolate many believe is the world’s best and thought to be extinct for over a hundred years – recently a small grove was discovered in an extremely remote area of Peru. Chocolate for the Spirit is one of a small number of chocolate companies given access to this chocolate – so special the militia guard it,” Bolejack explains.

She says her products include grand cru, single-origin chocolate bars (extreme premium), toffee, truffles, cocoa, bark, caramels, turtles, brittle and other confections and Bolejack personally created all of the recipes.

She started her business three-and-a-half-years ago, leaving the corporate world to pursue her passion after a 30-year career. She says she did so after finding incredible chocolate during her travels.

“I traveled and tasted really amazing chocolate. I am not talking about sweets, per se, but really amazing chocolate that had beautiful flavor profiles and nuances unlike any I had ever tasted before and could not find locally. When I decided to leave the corporate world to pursue a passion for my personal ‘Act III’ I decided I would only work with extremely high quality chocolate – would treat others with a discriminating palate to the chocolate I experienced,” says Bolejack.

In addition to the international salon award, Chocolate for the Spirit has won other awards as well.

“We are an Indiana Artisan – a prestigious award given to a select group of artisans to recognize excellence. Less than 20 percent of those who apply are juried into the Indiana Artisan program. We’ve taken top awards at the NY Chocolate Show, recognized at numerous events and shows coast-to-coast,” she says.

In addition to a booth at the Fishers Farmers’ Market, Chocolate for the Spirit has retail locations at the Indianapolis city Market in downtown Indianapolis and at 301 East Carmel Dr. in Carmel. You can also check it out at www.chocolateforthespirit.com.