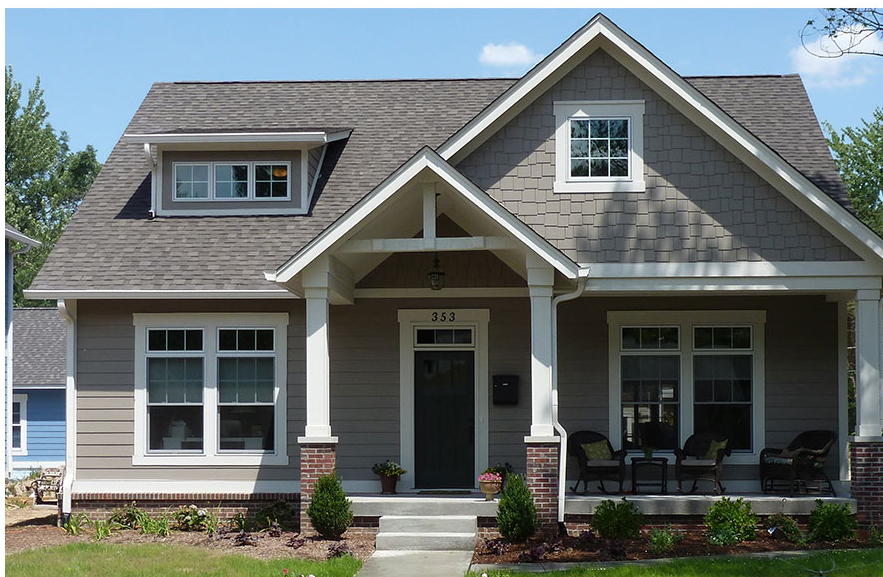 Justin Moffett plans to develop phase 2 of the Blackwell Park project in Old Town Carmel. Pictured is a home from phase 1 of the project. (Submitted photo)

Throughout the Old Town section of Carmel, small lots have been developed into custom homes by local developer Justin Moffett.

Moffett describes the homes as “right-sized” because they feature smaller yard sizes with the home buyers’ money being spent on amenities rather than land.

And Moffett’s reach will extend even further with several new projects in the works.

The project sits in the Northeast quadrant of Old Town, with Range Line Road to the west and Carmel High School to the east. Blackwell Park Phase 1 was constructed in 2010 and all the homes are occupied.

Moffett said one big part of his plan is take Burnett Court – an area that dead-ends with no connectivity and possible drainage issues – and remove it to help build this subdivision.

“What we’ve heard loud and clear from the neighborhood is they would like to see Burnett Court redeveloped and turned into something attractive for the neighborhood,” he said. “Our hope is to bring back into the character of Old Town Carmel.”

In order to maintain necessary green space and provide a tree buffer, Moffett acquired a parcel at 1945 E. 136st Street. They’ve split the property at Cool Creek and include the southern acres as a preserved woodlands common area. Moffett said it would be a tremendous natural amenity open to all. There will also be a nearby pocket park.

Adding to the project, last week the Carmel City Council and the Carmel Redevelopment Commission approved the sale of a piece of property at 7th Street NW. The property had an appraised value of $203,000. Moffett’s group placed a bid of $65,000 for the property, but agreed to improvements to the area, such as road repairs and the park, that it brought the overall value to far more than $200,000.

One nearby resident voiced some concerns about this project’s proximity to his neighborhood.

Moffett responded by saying there are alleys on the east and west ends of the property. He said the lots are even larger than many surrounding areas and emphasized that he really believes this development is what planners originally intended for the area. He believes there are adequate tree buffers.

Moffett, along with his development partners Jeff Langston and Andrew Greenwood, is also working on plans for a retirement community called Green House Cottages. It would feature six skilled nursing cottage homes and an administration building on 4.61 acres at 140 and 130 E. 126th Street, east of Range Line Road.

Some neighbors expressed concerns about parking, traffic in the area and loud garbage trucks emptying dumpsters. City Councilor Kevin “Woody” Rider told the crowd he felt many of those issues are unfounded because it would not be in the developer’s best interest to have a crowded parking lot and congested streets. Plus, late night garbage pickup, waking up nursing cottage residents, is not only unheard of, but it would be unwanted by all.

Moffett has also acquired the land where Sunrise Golf Course used to be located and there are preliminary plans to develop it into an empty nester community.

“My preliminary plans for Sunrise Golf Course are for a master planned residential community featuring various housing types that will appeal to a wide spectrum of residents,” he said.

Mayor James Brainard has been a supporter of Moffett’s work. He said the higher density in some of these projects is no problem for this particular section of Old Town and he feels it’s important to provide “a variety of options for homeowners.”

“This is the way Old Town was a hundred years ago,” he said. “It allows the area to be walkable instead of having sprawling yards. These are high quality homes with good craftsmanship that really fit with the character of the area. The homes look like something you would find a century ago in the area.”