You are at:Home»Current in Carmel»Carmel Community»Carmel High School girls volleyball to play Aug. 26 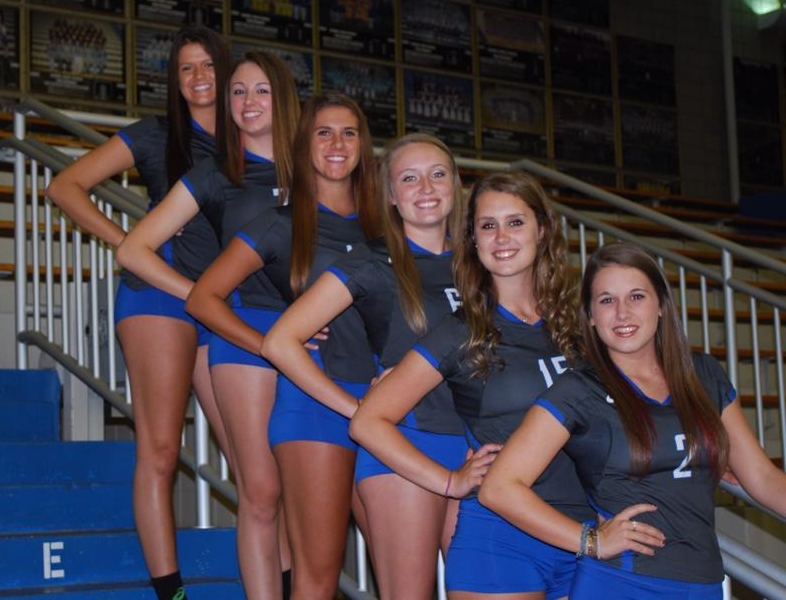 The 6 senior volleyball players in the picture from top down are: Carly Skjodt, McKenzie Kiesle, Lauren Gold, Megan Flatley, MacKenzie Cole and JamieScherb.

The silence is deafening.

For the past two seasons, the Carmel girls volleyball team has made it to the State Finals, only to be beaten on both occassions by Avon High School.  Ah yes, Avon…Carmel is quite familiar with this rival, not only on the athletic surfaces, but with academia and music as well.  They are a mighty foe.

Carmel begins the 2014 home volleyball season on Tues, Aug. 19th against county rival HSE and then quickly meets up against Avon at home on Tues, Aug. 26th at 6:30p.m.  This 2014 Carmel Volleyball team is loaded with talent, led by six seniors whom all play at a high level year round.  What this 2014 squad is lacking, however, is support.  Butts in the seats.  Voices in the stands.

The silence in the gym at some volleyball matches is deafening.  Oh, the parents are there in full force, but where are the Carmel students, the faculty, the community?  They seem to head out to the football field and the soccer field, even to the Natatorium, but they just are not usually found in the gym on weeknights during September and October cheering on the volleyball team.  What a missed opportunity!  These girls are FUN to watch play.  You can tell they love the game and their volleyball family.  Our family has been a part of the Carmel volleyball family for over six years with three different children.

Carmel Girls Volleyball is going to be tough this season, ranked near the top of the charts.  But there are some fierce competitors coming after us.  Our players need fans in the gym to cheer them on and give them support.  It has been proven that teams with the higher fan attendance have a higher win percentage.  Why not make that Carmel?!  We want to make the most of the Home Court advantage; not have it be a disadvantage.  This could be the year for the silence to end and for the girls volleyball team to join in the 100 plus…and you could be a part of it!

Hope to see you in the gym on Tues, Aug. 26th, ready to cheer on our Lady Hounds vs. Avon.  Phone your friends, tell your neighbors!  Then mark your calendars for Sept. 24 and Sept. 30 when Noblesville and Cathedral come a-calling.