The sports dilemma at the largest high school in Indiana

The best of the best. This is Carmel High School sports. 130 state championships proves it. But, what about the rest, the ones who don’t make the team? It comes down to numbers – 12, 22, 9, 7, 4855, to name a few. They are the varsity team roster spots for girls and boys basketball, soccer, golf, and tennis, respectively, with 4,855 the 2014 enrollment to Carmel High School as of press time.

“In my oldest son’s class in sixth grade, we had 32 boys playing on pups. By the time they were freshmen, only 14 kids tried out. By senior year, there were only 4 left who played,” Carmel father Jim Roop said. “I have no doubt you could walk the halls of Carmel High School and put together three or four teams of kids who could win a state basketball championship. There’s so many [expletive]kids.”

When students are cut or quit the competitive track, the school has options like football, swimming, and cross country which are open to all students. Carmel High School Athletic Director, Jim Inskeep, encourages students to try new sports and clubs and not be too focused on one sport at a young age.

“We would love to have a place for everyone but, at the end of the day, there are only so many spots. There are no guarantees, some things are in your control and some are out of your control,” Inskeep said. “We provide intramurals and Carmel Dads’ Club to satisfy a love for the activity and another option. The worst thing is to become a 7:30-(a.m.)-to-3-p.m. student. It usually leads to poor decision making and a different circle of friends.”

Carmel Dads’ Club, a not-for-profit formed in 1959 by a group of Carmel fathers, has eleven sports available with approximately 1400 high school students in the program. Roop has been actively involved in CDC with his three sons as a coach, volunteer, and board member.

“I don’t think the school could have grown to the point it is without the Dads’ Club being there to provide a competitive outlet for these kids. It keeps kids active and out of trouble,” Roop said.

The Cost of Making the Team

Making the team comes with great cost and sacrifice. Zoe Woods knows this sacrifice well as a freshman who secured one of the coveted seven varsity spots playing number three singles.

“I love playing, but I don’t have time to do anything else but tennis and homework. I’m usually up until eleven every night,” Woods said. “It’s a big sacrifice, but it’s a good sacrifice. I don’t ever look back and wish I did something else.”

Starting at age six and playing five times a week from age ten with a private coach, Zoe’s investment has not only been in time but with a $5,000 to $7,000 financial commitment per year according to father, Chip Woods. He emphasized the importance of tournament play and private coaches which can create an unfair advantage over economically-challenged or single parent families with limited schedules.

“Whenever we go to another school, we know who the good players are from the tournaments,” Chip Woods said. “The kids Zoe plays with are all doing the same thing, and some pay more who travel by plane to additional tournaments. I can see why other schools hate Carmel who just can’t afford it.”

Many families choose private school which provide more flexibility and opportunities to play. Carmel resident, Nick Kirkpatrick, transferred from Carmel to Brebeuf Jesuit at the end of his first semester freshmen year which opened the door to play two sports.

“If I stayed at Carmel, I couldn’t have done both. The competition is so high you have to focus,” Kirkpatrick said. “While my decision ultimately came down to academic reasons, being able to be a multi-sport athlete was a great perk.”

“Looking back, I may have missed out on a couple state championships, but at least I didn’t have to give up what I enjoyed – playing soccer and running cross country,” Kirkpatrick said.

For many families, playing sports drives the decision to attend private school. Lee Lonzo, former athletic director and assistant principal at CHS as well as Indiana High School Athletic Association past board president and chairman of the executive committee has advice for families.

“Go to the best school for your kids educationally, not for sports. The ball stops bouncing for everybody someday,” Lonzo said. “If you’re basing your decision on making the varsity team, you’re making a bad choice.”

The reality of playing college sports and beyond is found at the The National Collegiate Athletic Association website. “Of the more than 450,000 NCAA student-athletes, fewer than two percent will go pro in their sports.” For men’s basketball, only 3.3 percent of high schoolers play in the NCAA and that number drops to .03 percent for high school athletes who make it to the professional level.

“Very few get athletic scholarships,” Inskeep said. “Of the three seniors who played on the state championship basketball team this year, only one will play college basketball.”

“Many students weed themselves out early. There aren’t a lot of seniors being cut. Many drop out after freshmen year,” Inskeep said. This is not only happening at CHS but is a nation-wide trend. According to ESPN magazine, “Millions of high school kids phase out organized sports, with the biggest drop-off coming early – during and after freshman year. High school sports can be competitive and involve roster cuts and commitments some teenagers can’t make … SFIA (Sports & Fitness Industry Association) reports that between ages 14 and 15 there’s a 26 percent drop in the number of kids who play at least one sport even casually.” 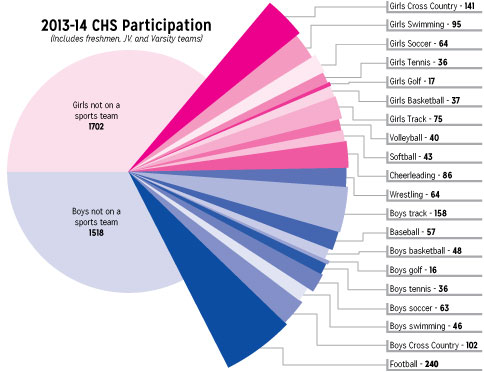