You are at:Home»Current in Westfield»Obituary: Mary Rachael Gossard 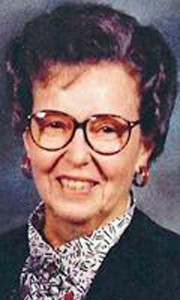 Mary Rachael Gossard, 98, died on July 14, 2014 at Wellbrooke of Westfield Center for Health and Wellness in the loving arms of her granddaughter. Born Sept. 24, 1915 in Boone County, she was the daughter of Fred Edgar McDonald and Blanche (Freeman) McDonald.

She was a member of the Class of 1933 that also had the distinction of being the very first class to graduate from the new Sheridan High School. While a student at SHS she won numerous local and state vocal competitions. She was a featured soloist at many prestigious events. She sang at many weddings and funerals for decades.  She also was an accomplished pianist. She was a graduate of the Indiana Business College in Indianapolis.

She worked for Weaver’s Department Store in Sheridan for many years. She also worked for 25 years and retired in 1978 from Western Electric in Indianapolis. She was a layout and set up operator. She also was very proud to have completed the wiring for the very first Princess telephone. She was recognized for her many years of perfect attendance.

She also was an extraordinary “Made from Scratch” cook and created many Gossard Family traditions. She was able to prepare her traditional and “Made from Scratch” foods for her final Thanksgiving dinner in 2010. Just one of her many time honored traditions was preparing craft projects for everyone to enjoy after Thanksgiving Day dinners. Everyone would work all afternoon creating very complex craft projects that could be used for the Christmas holiday. Her talents as a cook and baker were known for generations of family and friends. Children of her G and E Club members still comment to this very day about her extra-ordinary cooking and baking. She also enjoyed doing all kinds of “handwork” as she called it. She loved sewing, net darning, needlepointing, knitting and crocheting.  She often submitted her work to the Boone County Fair where she won numerous awards and recognition throughout the years.

She always said that some of the very best and most enjoyable years of her life was traveling to see her granddaughter, Julie, perform as an Indiana State Sparkette, but more importantly she would joke was that she was fortunate enough to attend every one of Larry Bird’s home basketball games. She and her husband, son, daughter-in-law, Judie, and grandson, Alan, would even drive to Greencastle for all of Larry Bird’s away games just so they could watch the Indiana State basketball team at a local motel.  When she was asked why she retired so young from Western Electric she said she had to because she was getting too worn out from traveling to Terre Haute to all of the Indiana State home games and then, to Greencastle to watch the away games and be able to get up to go to work and be on the road at 4 a.m.

She possessed a wonderful sense of humor that was with her until the end.

She  was blessed with a lifetime of phenomenal health and was able to live in the comforts of her very own home until she was taken to the hospital on May 2.

She was dearly loved and cherished.  She will be especially missed by her grandson, Max Alan Gossard, and her granddaughter, Julia Kay Gossard, who lovingly created her special moniker of “Mamoo” from which she was known forever after by her family since 1959.

Memorial contributions may be made to the Max E. Gossard Jr. Scholarship Fund, care of The Farmer’s Bank, 957 S. White Ave., Sheridan, 46069.