You are at:Home»Current in Fishers»Lt. Governor headlines Fishers Chamber Luncheon 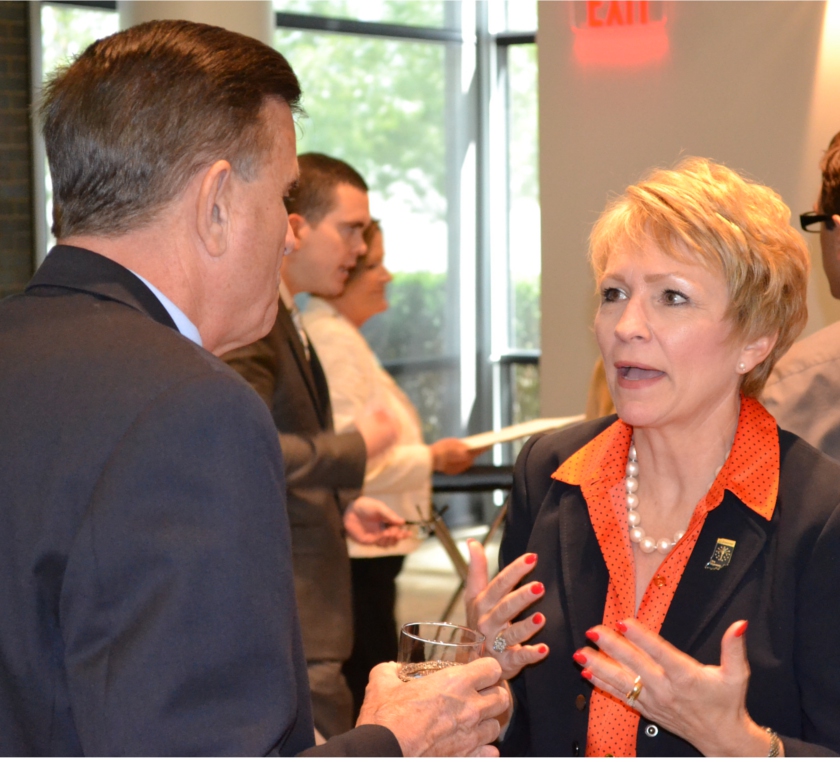 Indiana Lt. Governor, Sue Ellspermann, was the featured speaker at the Fishers Chamber of Commerce Luncheon July 16 at the Forum Conference Center. As the Vice-chair of the Indiana Career Council and co-chair of the state’s Blue Ribbon Panel on Transportation Infrastructure, Ellspermann focused her 20-minute presentation on the state’s initiatives in those two areas.

“As the governor and I came in, we said job creation is job one,” said Ellspermann. She went on to tout Indiana’s favorable ratings from Chief Executive Magazine (No. 1 in the Midwest in its Best & Worst State Survey), a Triple-A rating from all three ratings agencies, and No. 1 in the Midwest on the Tax Foundation’s 2014 Business Tax Climate. Additionally, Ellspermann pointed out that 63,000 new private sector jobs have been created since she and Gov. Mike Pence took office in 2012.

Ellspermann believes that job creation can be spurred on by improving Indiana’s percentage of the workforce that has a post-secondary degree. Currently that number stands at 34 percent. The Indiana Career Council’s goal is to increase that number to 60 percent by 2025. To that end, she says it’s important to make career counseling a priority in schools and “to engage employers much more closely to connect with and assist our schools in that career/college readiness.”

On Indiana’s infrastructure front, the lieutenant governor said the Blue Ribbon Panel that she co-chairs established three tiers of projects important to the future of the state’s roads, with tier-one being the most critical.

“Those tier-one projects … include adding lanes to I-65 and I-70, the Commerce Connector, and the I-69/Ohio River Bridge in Evansville,” said Ellspermann. She conceded that the Commerce Connector (another outer-beltway around Indianapolis) was controversial, but said, “It is important from an economic impact standpoint.”