You are at:Home»Current in Westfield»Adding an amenity

Westfield has its first disc golf course thanks to an Eagle Scout project by Alec Brooks, who started planning it in 2012 as a Life Scout in Troop No. 107.

Brooks said his idea came from the disc golf course at Northview Church in Carmel.

“I had never played but I thought it was kinda interesting,” he said. “I knew it was a fun activity for the family. The ball just got rolling,”

The course has nine holes with two tees each – making it an 18-hole course.

“You can go around and play it twice,” Brooks said, noting the buckets and poles are removable and each hole has two locations. “People can come back and (the course) can be slightly different. It is open year-round unless there is a parks event. Just bring your own Frisbee.”

“Everything went pretty smoothly,” he said, adding its great “seeing it all in the ground.”

Because Asa Bales is smaller than other Westfield Parks, Brooks said it was designed by Dennis Byrne with a recreational style instead of league play. Byrne has designed all seven of Hamilton County’s disc golf courses.

“For less than the cost of a tennis court, you can have a disc golf course,” Byrne said, adding the game is “a great life sport” and still continues to play even with a hip replacement.

“Disc golf is exactly the same game as golf. You just use a different instrument of torture.”

To build the Westfield Lions Club Disc Golf Course, Brooks raised $7,000 in a year and a half which did not include design time and labor. He said fundraising was the hardest part of the project and greatly appreciates the Lions Club for their support.

“I was approaching a half-year into it. It was a big relief and a big help,” he said.

“I’m so excited. Families of all ages can play together. It brings in a whole other element to Asa Bales Park,” she said. “The Westfield Parks and Recreation is very fortunate, especially this past year, to have the Boy Scouts step forward and bring wonderful amenities to the community.”

Jones said the parks department has seven Eagle Scout projects planned this year for the various parks including covered swings, a tree planting at Osborne Park, library in a box at four sites, and a Girl Scout Gold Award  project to build a rain and butterfly garden on the south end of Asa Bales Park.

“It is fabulous that Eagle Scouts bring new amenities to the parks through these types of projects, especially the Disc Golf Course project led by Alec,” Jones said. “We have a great relationship. We love the Boy Scouts and Girl Scouts.” 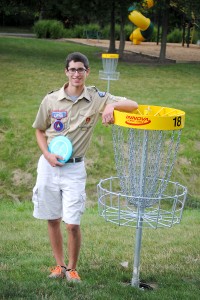 Scouting: Brooks is a member of Troop No. 107. He has been a Boy Scout for five years and in the Scouting program since a Cub Scout in second grade.

Favorite Scouting memory: “On campouts playing football in the woods. Hanging out with all my friends there.”

What he enjoys about Scouting: “I enjoy learning all the unique skills they don’t teach you anywhere else. It’s a cool opportunity to go on camping trips,” he said, adding that during his Boy Scouts tenure he has visited Philmont Scout Ranch twice, hiked the Appalachian Trail and camped all through Indiana. “I now have these skills and experiences I wouldn’t have had if not in Scouts.”

Why he got into Scouting: “My dad got me into it and I thought it was fun.”