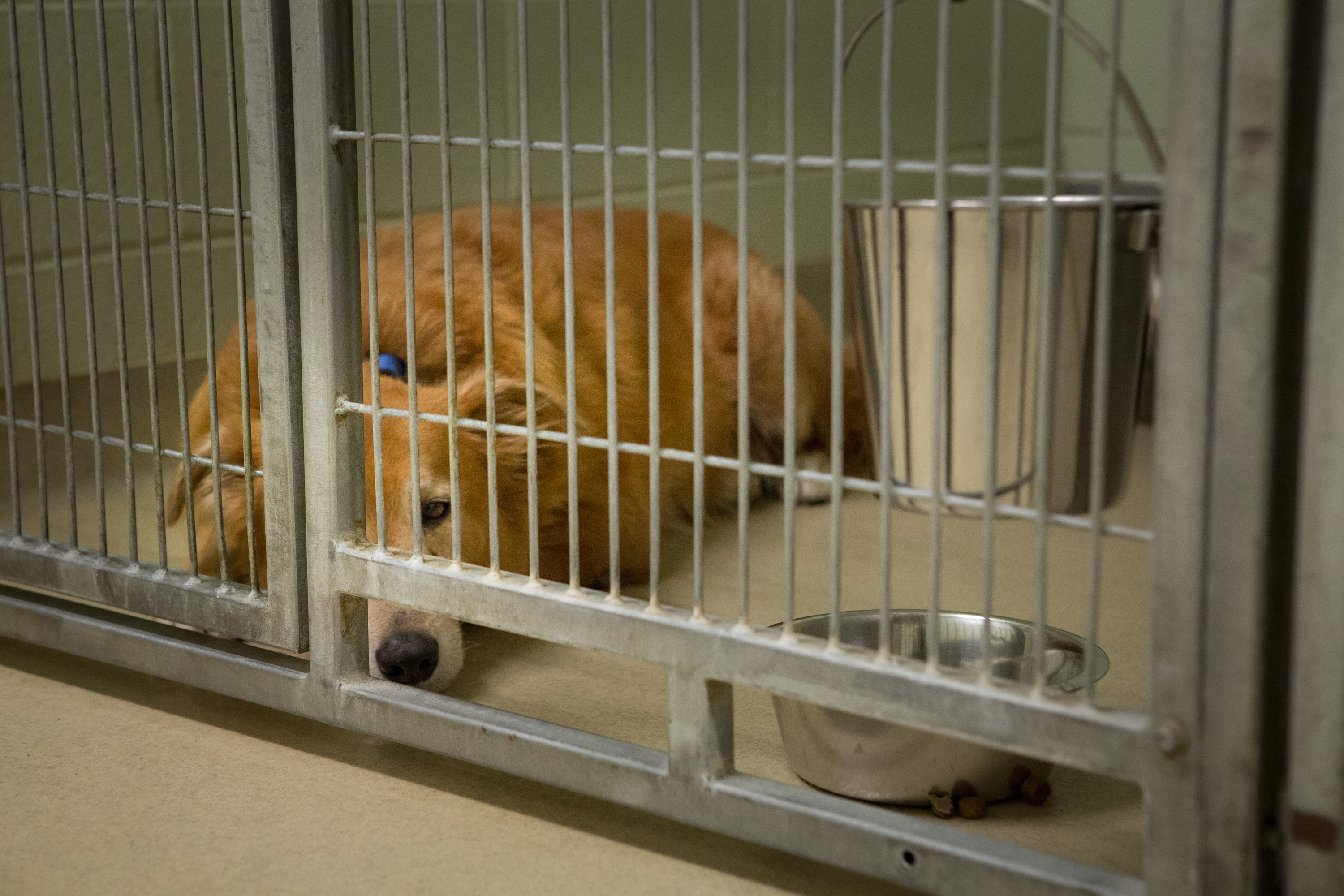 Dogs have had to endure days without air conditioning in the Humane Society for Hamilton County’s overcrowded shelter. (Staff photo by Sara Crawford)

Despite her problems, Jade is a happy dog. She might not have any teeth, but she still has a big smile.

This black pit bull had her teeth pulled out by her previous owner when they forced her to breed. She’s covered with scars from past injuries and very large tumors. Despite her traumatic life, she absolutely loves people and sniffs anybody that passes by.

But Jade is afraid of other dogs, so she spends her days in the office of Rebecca Stevens, executive director of the Humane Society for Hamilton County. That’s because there’s literally no other space for this sick dog.

And this isn’t a unique situation.

The shelter – the only one for the entire county – is extremely full. One cat that has leukemia lives in their conference room. The problem is compounded by the fact that there’s no area to quarantine sick or contagious animals.

Take a tour and people will see there’s no wasted space.

“There’s an animal everywhere,” Stevens said. “We are dealing with a lot of serious challenges in a lot of areas, but we are trying to overcome them to the best of our abilities and save these lives.”

The Human Society for Hamilton County is still committed to remaining a no-kill shelter, which means they only euthanize pets in extreme situations. They don’t turn away any intakes, even if the shelter doesn’t have room.

As a result, there’s a huge reliance on using foster homes for nearly half the dogs and cats in their care.

At their May board meeting, there was talk about fundraising for a new larger facility. There have been no public announcements, but they are looking to launch a capital campaign to raise up to $7 million.

The animals are dealing with upper respiratory infections and eye infections because the pets are kept in such close quarters that it’s difficult to avoid spreading illnesses.

As a result, the shelter spends more than $100,000 on medical care, a cost that is entirely paid for through private donations and not from taxpayer money.

Stevens said foster homes are an absolute necessity to remain no-kill and open admission, but it can be hard to recruit new people. There are so many roadblocks.

Some people are afraid they will get too attached and won’t be able to give up the pet. Some dogs and cats have special needs, such as problems with other animals. And of course there are many misconceptions, such as cost.

But the shelter pays for any expenses such as medical care, crates, food and even kitty litter.

“It doesn’t cost you any money or a lot of your time. All you need to provide is love,” said Paula Fuccillo, who is currently fostering a border collie who was attacked by other dogs and has a broken leg.

Fundraising for the future

Stevens said one common misconception is that the county pays for all of the shelter’s costs. In reality, taxpayer dollars only cover the first seven days that an animal is in the shelter. From then on, all of the rest of the financial support comes from private donations.

If a dog is hit by a car, the entirety of that cost is privately funded. As a result, the Humane Society is always looking for new donors.

The cost per animal averages out to be about $8.50 per day.

Because there are so many costs, most of the donations go toward basic needs. Recently, there wasn’t even air conditioning in the hot garage where dogs are kenneled. One dog suffered heat stroke as temperatures reached upwards of 90 degrees.

They were using a portable unit, but that died. Fortunately, a donor stepped up with $10,000 to install a new air conditioning system.

But the biggest challenge will be raising money for a new shelter.

Stevens said it can be a politically sensitive issue so she’s enlisted the help of Carmel City Councilor Luci Snyder to help navigate those waters.

Snyder said the biggest help would be finding someone to donate land for the approximately 20,000 square-foot facility. She said they are open to most locations.

“Maybe there’s someone out there with five acres of land that isn’t really sellable but would be perfect for our needs,” she said.

Rebecca Stevens, executive director of the Humane Society for Hamilton County, said that with more space the organization could

● Cut down on illnesses spreading, which would save money.

● Provide services that generate needed revenue, such as camps and training courses.

To find out about how to foster a pet or donate to the Humane Society for Hamilton County visit www.hamiltonhumane.com.