You are at:Home»Current in Carmel»Carmel Community»Back in the Day: Coach put Carmel basketball on the map

You could say a man named Eric Clark went a long way toward putting Carmel on the map. He was a teacher, a counselor, a coach, a school administrator and community role model. 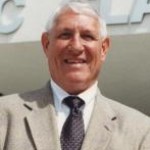 Born in 1935, he grew up in his parents’ home on River Road in what was then a very remote corner of southeast Clay Township. His father was a doctor, a prominent heart specialist.

Clark graduated from Carmel High School in 1953, then Earlham College, and then started a career of nearly 40 years in education, first as an elementary teacher, then high school, coaching football, then basketball and finally entering administration.

Stories about the always-upbeat Clark are legendary. It is said that as the high school prom approached each year, he would make efforts to match boys and girls who otherwise had no date for the big dance – certainly a true story. Carmel had been a small school when Clark was a student, and his informal personality and actions left that small school touch on a big school population.

Another story, also true, relates that upon retirement, Clark was given a pickup truck by school faculty and administration. He parked the truck in his driveway with keys in the ignition and let it be known that anyone in town needing the use of a truck could come and borrow it.

Back in 1977, his seventh year as CHS basketball coach, Clark took his unranked team to the state finals. Hard as it is to believe, many in Indiana outside the Indianapolis area still thought of Carmel as a small town somewhere in central Indiana, but were not sure exactly where.

In the state championship game, Carmel upset highly-ranked East Chicago Washington and put Carmel on the sports map for good. No Hoosier lacks knowledge of Carmel anymore because, of course, in Indiana if your school wins the state in basketball everyone seems to know who you are.

Clark retired from coaching after that championship, and was named Coach of the Year and later inducted into the Indiana Basketball Hall of Fame. He then went on to become an assistant principal at CHS for another 20 years.

He retired in 1997, but remained in Carmel, started a firewood business which provided for exercise, enjoyed hunting and fishing, attended sporting events with his family and was considered a part of the school family until his untimely death in 2009.

His passing was mourned by educators and followers of school sports around the state.