You are at:Home»Current in Carmel»Carmel Cover Stories»Redevelopment in southern part of Carmel centers around former Sunrise Golf Course

Just across 96th Street, as motorists drive along Westfield Boulevard into Carmel, there might be a flood of newly-built homes to greet them.

There could be new high-end luxury apartments – with some of the highest rents in the area – right past the roundabout on the east side of the street. And to the west, there could be a development of “empty nester” homes that might replace a popular wooded area around a lake that is often used by neighbors for recreation. And there’s even news about development where the former Sunrise Golf Course sits, which should be announced in the coming months by Justin Moffett of Old Town Design Group.

Carmel Plan Commission member Alan Potasnik said this part of town is popular for new development because of its proximity to Keystone, I-465 and other routes to easily commute to Indianapolis.

“Obviously, being in the southern part of the county, so access to Indianapolis is easier than other places,” he said. “Why it’s all developing now and not years ago, I don’t know, but it seems like the time has come.” 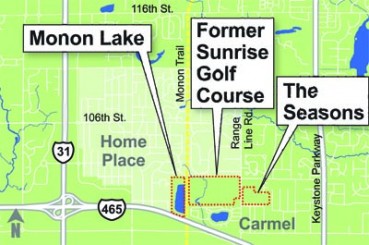 Ever since it was put up for sale in October of 2013, rumors have surrounded the fate of the former Sunrise Golf Course, located just north of 96th Street on Westfield Boulevard.

Now, there are some answers.

Carmel developer Justin Moffett said that he has acquired the 75-acre property and plans to have his Old Town Design Group build homes in the area.

Moffett said he has no definite plans in place and is working with national architecture firm Looney Ricks Kiss, which he said has a great reputation all over the country for its work on master-planned communities.

“We wanted to bring in a team of experts,” Moffett said of his future design plans.

Old Town Development partner Andrew Greenwood said they’re targeting the end of July to have a plan in place that they could present to city planners.

The land is currently zoned for low density residential, which would require a rezone to meet what Moffett said the market is demanding – well-planned smaller-lot homes targeted at “empty nesters.”

“It’s a location where people really want to live,” Moffett said. “Great proximity to amenities, schools, shopping. The Monon Trail is a big plus. I just think that the time is right for this area.”

He said any new development wouldn’t be limited to single-family homes, but that those would be a significant component. The things not likely to appear? Commercial development or anything resembling tract housing. And any remaining structures from the golf course will likely be removed.

Moffett said one of the reasons that the Hinshaw family selected his company to sell to was because they want to preserve the wooded area of the property that’s adjacent to the Monon Trail. He even said he plans to work with the city to create a park in honor of Vera Hinshaw in that area of the property.

She had lived in a house just south of the golf course since 1967.

“We’re excited about the opportunity. We know how important the ground is to the community,” Greenwood said.

The Hinshaw family had owned the land that comprised the former Sunrise Golf Course for 150 years.

Vera’s daughter, Judy Singleton, said the land was acquired from Charles Moffett and it had been passed down for more than four generations in the Hinshaw family. She and her siblings affectionately referred to it as “Wind Pump Baby.”

“It is a very special piece of property, and it had a wonderful history in our family,” Singleton said, noting that the current 14 family members who controlled the property selected Old Town Design group because they were sensitive to that history.

“We wanted something nice for Carmel at its front door,” she said.

Years ago, it seemed that apartment development was nonexistent in Carmel. And to this day, some people still scoff at the idea of more renters joining Hamilton County. But things have changed.

High-end luxury apartments are all the rage in Carmel. Sofia Square in the Carmel Arts & Design District and the proposed $80-million development The District are targeted at those with a higher income but a desire to rent, either because they are “empty nesters” or because they don’t want to commit to buying a home.

Barrett & Stokely and Pittman Partners are building a $35 million apartment development near the Monon Trail called The Seasons. Just north of the 96th Street roundabout and across from the former Sunrise Golf Course, the 256-unit complex will sit on 21 acres. The apartments will rent for an average of $1.15 per square foot. Although that could be subject to change, Rex Barrett, of Barrett & Stokey, said these units will be some of the priciest and yet most luxurious in the county.

“The whole thing is kind of styled after a resort atmosphere,” he said. “Amenities will be unusually nice for an apartment.”

Potasnik said the trend of high-end rental units doesn’t seem to be slowing because every time one is built there hasn’t been any problem filling these spaces. He said he was impressed by the improvements suggested by the developer and added that because it will feature single family homes it won’t have the same effect on schools and infrastructure than traditional homes.

Barrett said the easy commute made the location very appealing.

“The location and proximity is great,” he said. “It’s really close to Keystone and I-465 and it’s not that hard to get to Meridian. In addition, it’s really close to City Center and the District, so it’s a really, really good location from our perspective.”

Along the Monon Trail, just north of I-465, M/I Homes hopes to build a 34-acre development with 43 homes. But many Home Place neighbors of the project aren’t happy with the specifics of the plan.

At the April 15 meeting of the plan commission, developers said the Monon Lake neighborhood will have a density of 1.27 units per acre, less than the suggested density of 2.9 units per acre. They said the planned unit development would have 22.5 acres of open space, far more than the 20 percent which is suggested in the comprehensive plan. And home prices would range from $325,000 to $400,000.

The area is already zoned for 28 homes, but the developer is asking the commission to rezone the area so they can add more units to the project.

Opponents are quick to point out that much of the “open space” is centered in one large area and not between homes, and 12 acres of that space is taken up by the area’s lake.

The developers said the smaller lot sizes appeal to “empty nesters” looking to downsize instead of moving out of Carmel.

“Typically, these home buyers want to spend their money on more upgrades and not larger lots,” said Jim Shaniver, of the law firm Nelson & Frankenberger, representing M/I Homes at the meeting.

Neighbors have organized in their opposition to the development, obtaining more than 180 signatures for a petition and sending nearly 30 letters of remonstrance to the city. Their complaints include increased traffic because of inadequate entrances, problems with drainage, visual aesthetics and preservation of the natural surroundings.

Karen Cheek, a neighbor who created a Facebook page to voice opposition, said she likes having the wooded area as a barrier from noise from I-465. Plus, she worries about the variety of animal life living in the area.

“It’s wild, dense, mature woods,” she said. “It’s not appropriate for development. There’s not going to be a tree left there.”

Shaniver said Monon Lake fits in with the vision for the area because it fulfills a need for empty nesters while increasing connectivity to the Monon Trail and other pedestrian paths. He also noted there will be tree preservation barriers all around the development.

Plan commission member Joshua Kirsh said he couldn’t get excited about this development.

“For a lack of better words, this just seems like a shoehorn project,” he said. “You are putting a bunch of homes in an area’s that’s beautiful and shouldn’t be touched. I know it will still probably go forward, but that’s my comment.”

Neighbors accept that something will go in that space, but are hoping for just 28 homes. A previous proposal of a development with 75 homes was shot down in 2001.

There has been talk about Carmel Clay Parks and Recreation being interested in buying the property. While it’s true, there is interest, the area hasn’t been offered for sale to the department.

Director Mark Westermeier said the parks department was approached about becoming a “partner” in the project about a year and half ago, but was disappointed when only two acres of the project would be sold to them.

“Our version of a partnership is two parties working together. Theirs is screwing the parks department,” he said. “We have an interest. What we do not have an interest in is being used by a developer by saying parks is involved in a project in which parks isn’t involved. And their version of parks involvement is to sell a small portion of the land that would not fit our purposes or the purposes of the community.”

M/I Homes responded to an initial e-mail from the Current, but did not return phone calls for comment or respond to follow up e-mails.