You are at:Home»Current in Carmel»Pedcor CEO: All Midtown land acquired 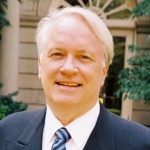 Pedcor CEO Bruce Cordingley spoke to the Carmel Chamber of Commerce on May 14, providing updates on the Carmel City Center and the Midtown plan.

The Midtown plan was originally proposed as a $100 million private-public partnership that would redevelop the largely industrial land north of The Palladium and south of the Carmel Arts & Design District to connect the two areas with mixed-use developments and an expansion of the Monon Trail.

Cordingley told attendees of the May 14 Chamber luncheon that most of the land needed for the Midtown plan has been acquired by either Pedcor, the city of Carmel or Justin Moffett, a local developer with Old Town Design Group.

While enthusiasm is high, Cordingley said he’s been told to focus his efforts on finishing the construction of City Center before tackling this next project. Crews are currently working to finish The Nash building, a three-story $10 million mixed-used building as part of that project.

It’s still unknown where the public part of the funding for the private-public partnership will come from. City Councilors Rick Sharp and Luci Snyder both said they are reluctant to issue any new bonds for projects. Sharp said that while he likes Pedcor as a company, he doesn’t want to see any more deals similar to the one they got with regard to City Center.

While plenty of construction could be done by private developers without city money, one of the centerpieces of the plan is construction of what is called a “Monon Boulevard” where there would be two lanes to the bike/pedestrian trail with commerce surrounding it. Snyder said she believes the government would end up paying for that, which will ultimately hold up the project.

“What is the tab for that? Well, somewhere between $16 and $20 million, we don’t know because it’s an old industrial area,” she said. “Let’s just say it’s $16 million. Whoa! Does my budget look like I have $16 million or I want to borrow $16 million? Well, maybe if a very strong user is going to put in a lot of their own money and they only need a fraction from us, then maybe.”

Mayor Jim Brainard disputed that number, saying it’s closer to $8 to $10 million. He said public money would have to be spent on parking, but believes the hurdle isn’t insurmountable. He thinks the time table on construction could be sooner than people think.

Cordingley said that there are state tax credits available that could help with much of the financing of the project. In May 2013, the City Council voted against letting Pedcor pursue such tax credits because some councilors were afraid that it would commit them to the project.

Sharp said he isn’t against the Midtown plan, but he would prefer that it be driven by market forces and not government action. If government funding is essential, he would preach patience on this project.

Cordingley did express his patience at the luncheon, reiterating that he’s focusing on the City Center first and foremost.

Cordingley also addressed some vacancies in the City Center. When restaurant Mangia! closed this year after relocating to the City Center, it sparked a back and forth between its owner and Cordingley. Without rehashing the affair, Cordingley asked people to focus on the strong number of businesses that are thriving in spaces and throughout Carmel. He said that it is an economic reality, that even in the best economies, new and relocated small businesses often fail and that he believes the rate of failure in Carmel and his developments are much lower than elsewhere.