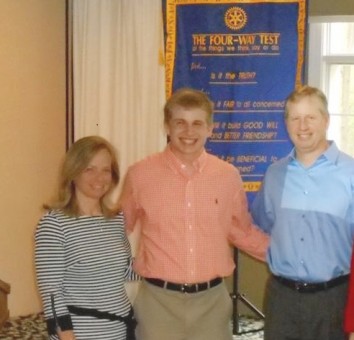 Steve and Debbie Klineman most likely are very proud parents – as they should be. It only takes a moment for anyone interacting with their son, Matthew Klineman, to discover he is a very special young man.

Steve and Debbie had to be pleased as their son approached the podium to begin his acceptance speech. Grinning from ear to ear, Matthew began his remarks by saying, “When sufficient trust is bestowed upon us, Carmel youth knows no limits.”

The room was hanging on his every word as Matthew continued his acceptance of the William D. McFadden Student Service Award. The distinguished award is presented annually to a Carmel High School junior by the Rotary Club of Carmel. The award recognizes exemplary behavior by our community’s high school students who are rising to the top and setting the world on a better course.

In Matthew’s case, he was chosen from an extremely competitive field of four finalists – each a standout in their own right. For this year, Matthew best embodied the attributes of which McFadden was famous for and generously shared with the Carmel community.

Currently, Matthew is the Vice President of the Carmel Mayor’s Youth Council. The Council is becoming very popular with local civic and charitable organizations for its ability to muster large numbers of volunteers for projects.

In Matthew’s case, he is credited with logging more than 1,700 volunteer-hours. The new 300 square-foot mural at the Indiana Design Center is the most visible sign of his effort. The mural, which was imagined, planned and executed by high school students, now serves as a beautiful backdrop for the Winter Farmer’s Market.

As part of the award, he will receive a $2,000 grant to award to the charity of his choice. He indicated he will use the money to make the mural project a yearly event for Carmel.

As Matthew spoke after accepting his award, it was clear he is a strong believer and advocate for our Carmel teens. He emphasized the importance of giving them a chance when he said, “I have a special request of all of you. Should opportunities to serve present themselves, do not hesitate to get youth involved.”

He received an understanding chuckle from the crowd when he thanked Mayor Jim Brainard and mentors Jane Reiman and Nancy Heck for their hands-off approach. The three of them obviously know what they are doing.