You are at:Home»Current in Fishers»Hamilton Southeastern School board presents cuts

HSE School Board voted to approve approximately $2.8 million in budget cuts for the 2014-2015 school year at its meeting April 14.

The reduction is the first round of trims the district plans to make in the next two years.

Pay-to-participate fees for extra-curricular activities, charging students for diplomas and diploma covers and selling graduation CDs to offset graduation costs will save the district $409,600 next year.

Mike Reuter, HSE Chief Financial officer, explained the cuts were necessary because the revenue the state provides is not keeping up with the cost of living.

The additional cuts for the following year could affect personnel reductions for staff and teachers. To avoid the potential loss of essential staff, Stuart Easley, Fishers Town Council member, is helping the district look for additional ways to increase budget efficiencies.

Easley has proposed a committee formed of three school board members and three town council members to focus on a plan to educate, motivate and lobby the State Legislature on the inadequacy of the current Operating Funds Formula.

“This grass roots effort would stress the importance of a vibrant school corporation to the vitality of the entire community,” Easley said.

Easley said that education/lobbying effort would look into extending the resolution that the county officials supported earlier in the year but would target the effort as a priority.

“Additionally, this education effort would serve to galvanize the community in the event that the State Funding Formula is not modified to the improvement of HSE and therefore a HSE Operating Fund Referendum would be necessary to create funds to adequately support the education vision for the community’s children,” he said.

Easley said HSE will work with the town to evaluate land holdings that could be monetized by the town.

“The conveyance of $3 million from the Town of Fishers to HSE would allow the schools to avoid the critical personnel layoffs of staff and teachers.

Easley emphasized that the plan would be a one-time action to provide headroom for one year as new efforts will bear funding—modifying the State’s School Operating Fund Formula and/or HSE going to the community with an Operating Fund Referendum. 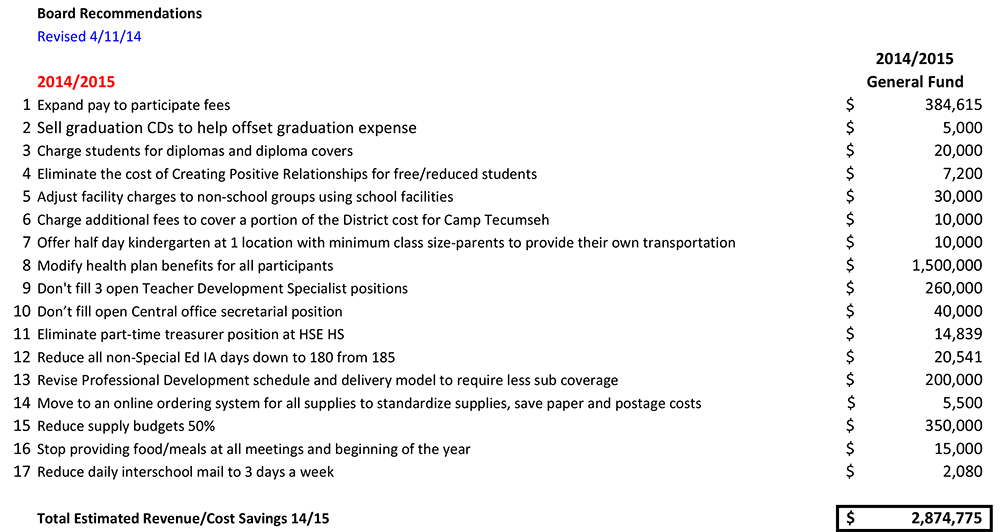