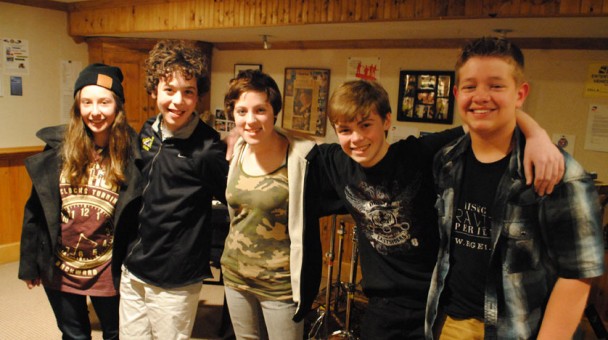 Sure, these rock stars might range in age from 13 to 16, but the Carmel-area musicians have been practicing their skills for years. In their minds, they aren’t any different from any other band.

“Lots of people, before hearing us, form opinions about us, thinking we aren’t going to be very good because we’re ‘just kids,’” said keyboardist Jack Loub. “But after they hear us, they take back everything they thought.”

And if people listen to their first studio-recorded album, Disillusioned, they’ll have to admit, the band has a point.

On their first track, “Person I used to be,” lead guitarist Ashton Dean Gleckman, 13, hits listeners right away with a face-melting guitar solo. It’s easy to forget that these guitar tricks are being pulled off by a seventh-grader at Carmel Clay Middle School.

Emma Boyd-Ryan, the band’s 14-year-old vocalist and keyboard player, lays down some heavy lyrics on the title track, singing, “Hope is lost / When we can’t tell the truth from the lies / It’s hidden in the light.” Deep stuff for a freshman at Carmel High School.

Sam Sherman, 13, pounds out rythms on the drums and 13-year-old Loub plays the synthesizer. Lizzy Raimondi, the oldest member of the group at age 16, plays bass in two different bands.

“Everyone has grown and matured as we’ve been in the band, and we no longer see it as a ‘kids’ band but as a fully functional musical band,” Boyd-Ryan said. “A lot of people thought we couldn’t be good because of our age, but in the past year or so we’ve gotten a lot more respect.”

The album has an alternative-indie rock feel. Boyd-Ryan has the punk-rock influence with short upbeat snappy tunes while Gleckman always wants to make the songs more complex, turning them into a rock-opera in the vein of Queen or 1970s progressive rock groups.

“If he could, he’d write an hour-long song,” Sherman teases him.

The unofficial band managers are each of their mothers.

“They control everything, basically, except the music,” Sherman said.

“Yeah, if they did the music, we’d have some … interesting songs,” Boyd-Ryan says with a laugh.

The mothers take turns working on the Web site and Facebook page. They drive the members to practices and out-of-town gigs. They shell out thousands of dollars for professional musicians to mentor the band and helped professionally record their album in Nashville.

“It’s so cool to see people’s faces after they see them live,” said Kim Sherman, the drummer’s mother. “Because we get a lot of people that write them off as a ‘youth band,’ and they don’t know what to expect.”

“Oh, I love that too,” Jennifer Gleckman interjects. “I think the music really speaks to that. The music is special because this is a special group of kids.”

They’ve played such events/venues as the Indianapolis Mini-Marathon, the Peyton Manning Children’s Hospital Christmas Party, Muncie Rib Fest, an Indianapolis Indians game, and many battle of the bands competitions.

And on top of all these things, Rising Gravity Experience has to worry about homework, tests and other extra-curricular activities.

“There’s a lot of pressure,” Boyd-Ryan said. “We have to get ready for concerts and gigs and are always writing new songs and riffs. I love doing all of these things, but sometimes it doesn’t seem as if I have enough time in the day to get everything I need to get done.”