You are at:Home»Current in Carmel»Carmel Cover Stories»New face for Old Meridian 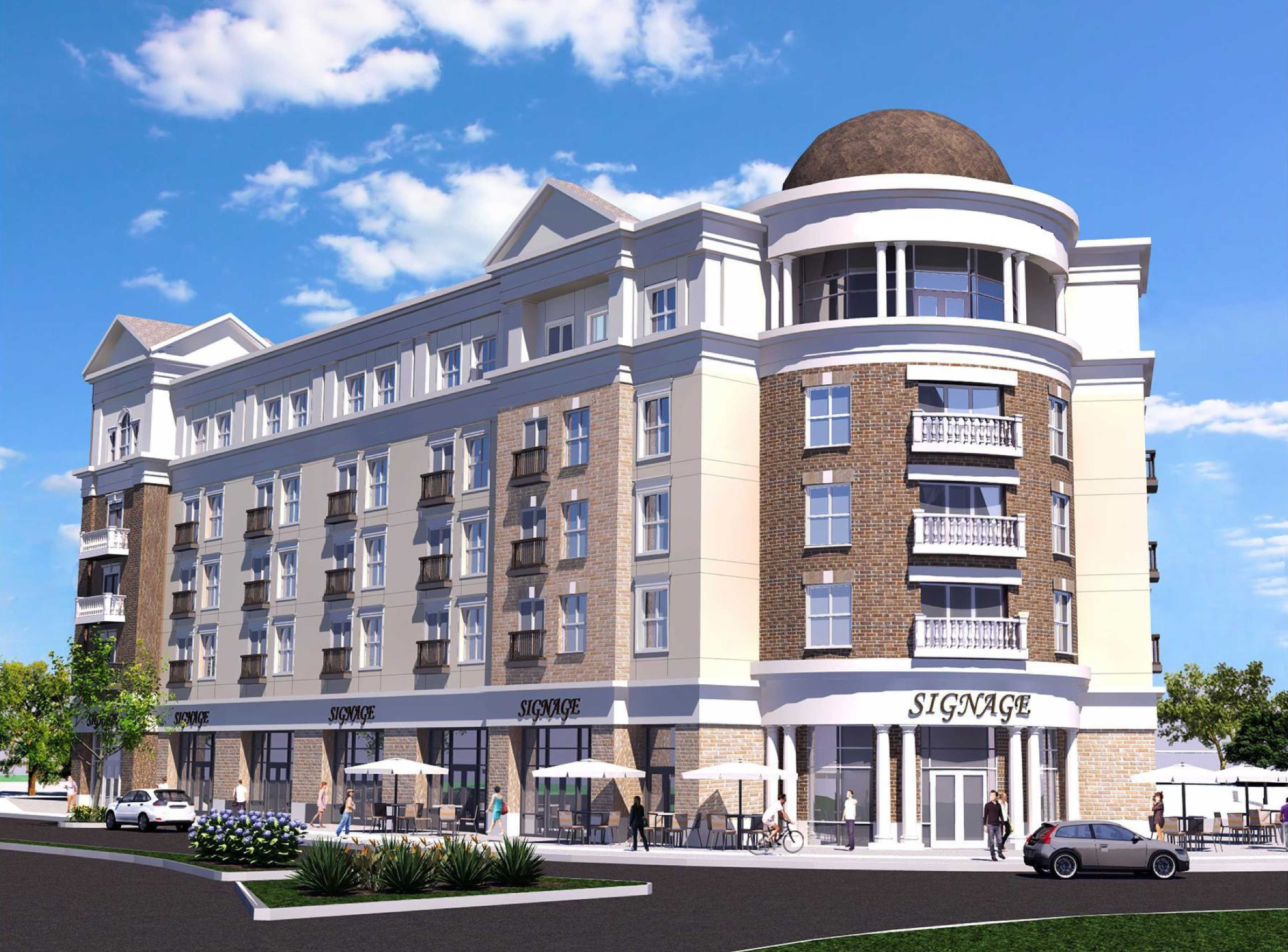 The Sophia Pointe building planned for Main and Old Meridian streets is just part of a plan to transform the neigh- borhood. (Submitted rendering)

By Karen Kennedy  If it seems to you like there’s a lot going on in the Old Meridian corridor, you’re right. The current explosion of development on Old Meridian is actually the result of a plan coming to fruition that was developed back in 1999. The Old Meridian Task Force was assembled in 1998, and that task force enlisted the services of architecture and urban design firm Scheer & Scheer of Cincinnati along with Indianapolis-based firm Development Concepts. The final report presented to the task force described five new development zones along 300 acres of the Old Meridian corridor, stretching as far south as the interchange of Pennsylvania Street and Old Meridian, Guilford Road to the east and U.S. 31 to the north and west. The Old Meridian plan called for what has now become a mantra in our urban planning: a walkable, high-density neighborhood, filled with a diverse mix of housing, specialty retailers, restaurants, entertainment, office buildings and public gathering spaces. The plan describes an “old-fashioned village with a Main Street feel,” with a combination of single family, apartment and condominium dwellings. Another key feature of the neighborhood plan is boulevards. The beginning of that plan is evident in Grand Boulevard, which currently connects Old Meridian and Guilford Road, but is slated to curve west and continue north almost all the way to US 31, with a park-like median that would support walking and biking trails and smaller, radial boulevards connecting throughout. The existing Meijer store is referred to as the anchor of the neighborhood. In terms of architecture, multi-story brick buildings are called for, with an eclectic mix of styles. “I think it is very exciting to see the new development in the Old Meridian corridor,” said original task force member Paul Reis, now a partner at the law firm of Krieg DeVault. “Obviously the market has changed but the basic goal of re-energizing the area with new businesses and residents is being achieved.” Around the same time that the task force’s report was submitted, the plan for the Providence on Old Meridian development was also submitted, and although the street frontages called for varied slightly from the Old Meridian plan, it was approved, and it blazed the trail for the many mixed-use PUDs that are now eyeing the neighborhood. “Obviously the plans for this area have adapted over time,” said Director of Community Services Mike Hollibaugh. “But we’re excited about what’s to come.” How U.S. 31 construction will impact Old Meridian Street: According to Mike Hollibaugh, several new interchanges will be created by INDOT as part of the U.S. 31 project: 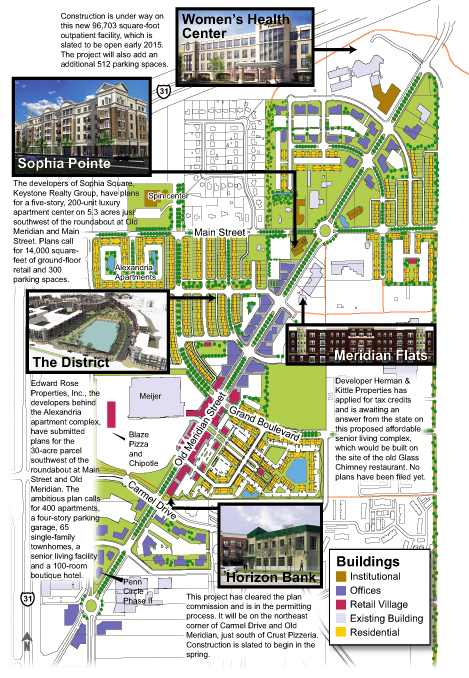 Construction is under way on this new 96,703 square-foot outpatient facility, which is slated to be open early 2015. The project will also add an additional 512 parking spaces.

This project has cleared the plan commission and is in the permitting process. It will be located on the northeast corner of the intersection of Carmel Drive and Old Meridian, just south of Crust Pizzeria. Construction is slated to begin in the spring.

Ground has been broken on this addition to the Meijer Outlot Shops on the west side of the parking lot. Blaze Pizza and Chipotle will open there later this year.

Edward Rose Properties, Inc., the developers behind the Alexandria apartment complex, have submitted plans for the 30-acre parcel southwest of the roundabout at Main Street and Old Meridian. The ambitious plan calls for 400 apartments, a four-story parking garage, 65 single-family townhomes, a senior living facility and a 100-room boutique hotel. “We don’t own the property yet,” said Steve Hormann, of Edward Rose Properties. “We are just starting the hearing process. But if everything goes according to plan, the initial phase would be the apartments and the senior living facility. Since we are primarily apartment owners and managers, we would be looking for a hotel developer to take on that part of the plan”

The developers of Sophia Square, Indianapolis-based Keystone Realty Group, have plans for a five-story, 200-unit luxury apartment center, tentatively called Sophia Pointe, on 5.3 acres just southwest of the roundabout at Old Meridian and Main Street. Plans call for 14,000 square-feet of ground-floor retail and 300 parking spaces. The project was hung up for a while with the Board of Zoning Appeals due to the fact that the proposed project is 35 feet taller than Carmel’s zoning laws currently allow. “I believe we have the height issue resolved,” said Mike Patarino, Vice President of Real Estate, Keystone Realty Group. “The property line itself actually dips down about ten feet at the building’s highest point, so it’s not as much of an issue as we originally thought. We are hoping for approval for the plan commission in April, and then we’ll need some variances from BZA. If all goes according to plan, we’ll break ground in July.”

Developer Herman & Kittle Properties has applied for tax credits and is awaiting an answer from the state on this proposed affordable senior living complex, which would be built on the site of the old Glass Chimney restaurant. No plans have been filed yet.

Plans have recently been filed for one additional building to be added to the existing apartment complex, just south of Carmel Drive near the roundabout of Old Meridian and Pennsylvania Street.

Developer Justus Rental Properties has announced plans to build a 185-unit senior-living apartment facility northeast of the intersection of 136th Street and U.S. 31. The new apartment complex would feature a mix of 87 independent-living apartments, 82 assisted-living units with available nursing staff and 16 living quarters for people suffering from Alzheimer’s or dementia.