You are at:Home»Current in Carmel»Carmel Community»Carmel Symphony Orchestra’s ‘Percussion’ to rock the Palladium 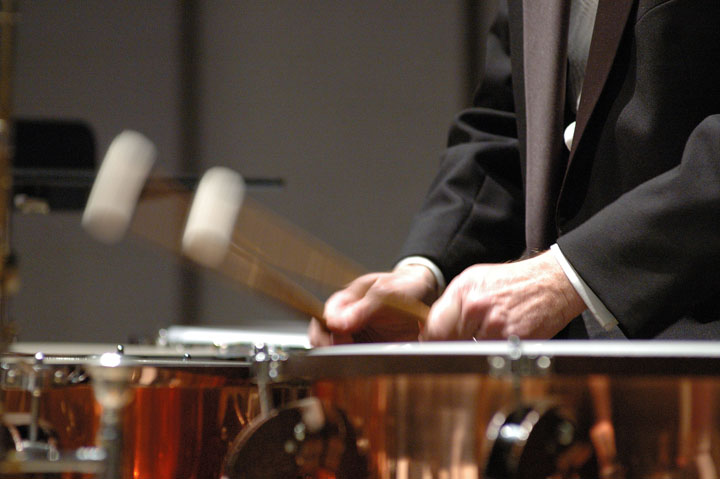 The Carmel Symphony Orchestra’s David Bowden will discuss the music of “Percussion Swings” at 6:45 p.m. before the show. (Submitted photos)

The Carmel Symphony Orchestra is bringing in the month of March roaring like a lion with its daring and unusual show, “Percussion Swings” on 7:30 p.m. March 8 at the Palladium.

CSO percussion section members Mark Stempel, Jason Spangler and Keli Welsh are highlighted in a program that includes Rodion Shchedrin’s “Carmen Suite,” Russell Peck’s “The Glory and The Grandeur,” and a medley of jazz and pops – including “Sing, Sing Sing” and “American Patrol” among others.

The trio will even have their own “music stations” full of percussion instruments.

“Percussion music is so exciting, both in terms of the sound of the different instruments and the mesmerizing physical activity as the soloists move among the instruments,” said David Bowden, artistic director of the CSO.

The concert starts out with a traditional symphony piece adapted from the opera “Carmen” that is presented in a not-so-traditional fashion exploring the world of beat and movement with over 60 percussion instruments playing at once, along with strings.

Russian composer Rodion Shchedrin wrote the “Carmen Suite” in 1967 for his wife who has been cited as one of the premier ballerinas of the twentieth century. Referred to as a mashup of Bizet’s “Carmen” or a meeting of the minds, “Carmen Suite” was originally banned by the Russian government for being too suggestive and disrespectful of Bizet’s work.  It has since become a classic and has remained popular with audiences.

Peck’s masterful concerto, “The Glory and The Grandeur: Concerto for Percussion and Orchestra” promises an explosive climactic tour-de-force and concluding the concert is Ottorino Respighi’s “Pines” of the Appian Way which will slowly build to a powerful celebration of music and movement, visualizing the victorious Roman army as they return from war.

Welsh has been the music teacher at College Wood Elementary for the past seventeen years and started playing with the CSO as a Carmel High School student.

Ticket-holders are invited to arrive early at 6:45 p.m. for Music Matters featuring the CSO’s David Bowden for a behind-the-scenes discussion of the music of the evening.

And while CSO concerts are recommended for all ages, “Percussion Swings” is not necessarily a kids concert. CSO will be offering a family fun concert on March 16 in which kids will be able to sit on stage and play some of the instruments afterwards.

“Percussion Swings” ● A performance by the Carmel Symphony Orchestra ● 7:30 p.m. March 8 ● The Palladium in Carmel ● Tickets start at $5 ● For more information call 843-3800 or visit www.thecenterfortheperformingarts.org