You are at:Home»Current in Carmel»Carmel Community»Three residents talk at Brookshire hearing 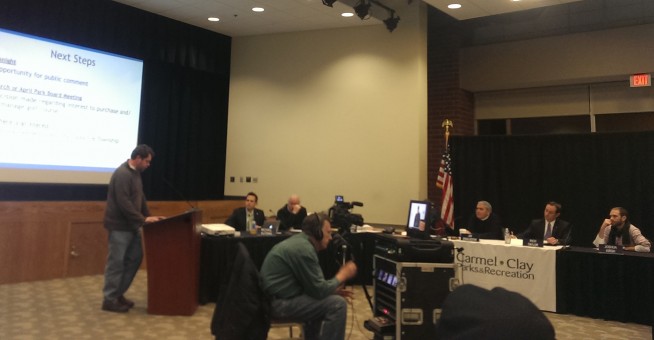 Jason Randlett of the Brookshire Home Owners Association addressed the Park Board in regard to the future of Brookshire Golf Course on Jan. 28. (Staff photo)

The Carmel public appears to have minimal interest in which government entity owns Brookshire Golf Course given that only three speakers addressed the Park Board at a recent public hearing on the topic.

The City of Carmel has asked the board to consider purchasing the course in the hopes of recouping the $2.6 million that the Carmel Redevelopment Commission paid for the course in 2006.

But in a Dec. 10 presentation before the board, a consultant hired to conduct a feasibility study on the subject recommended that the board would be better off letting the city maintain ownership and managing the golf course for a $50,000 annual fee.

At the Jan. 28 public hearing, Brookshire neighborhood resident Denny Archer spent his time highlighting the benefits of the golf course.

“The golf course is beautiful. It’s a diamond in the rough,” he said. “One of the best assets the course has is the people who are running it. Great people; don’t want to lose them.”

He also mentioned that the course needs a food service organization and that it’s a community asset that allows for a place for kids to learn to play golf.

Jason Randlett, a member of the Brookshire Home Owners Association, addressed the news that the City of Carmel had recently purchased the pool on the golf course and he said he wanted consideration to let the neighborhood continue managing the pool.

“Parks is probably the best organization to run the course,” Randlett said, noting that he thinks the course could one day be a revenue-generator for the department.

Carmel Clay Parks and Recreation Director Mark Westermeier said he planned to have a meeting Feb. 9 with the Brookshire HOA to discuss the issue.

Benjamin Taylor, also a member of the Brookshire HOA, said he didn’t think most homeowners would notice whether the city or parks department owned the course. But he did say he thought the parks department could run it better because it has a better relationship with the Indiana Department of Natural Resources.

The parks board likely won’t take any further action on its consultant’s recommendation in regard to the potential purchase of Brookshire Golf Course until meetings scheduled for March or April.