You are at:Home»Current in Carmel»Column: Megiddo: The last battleground? 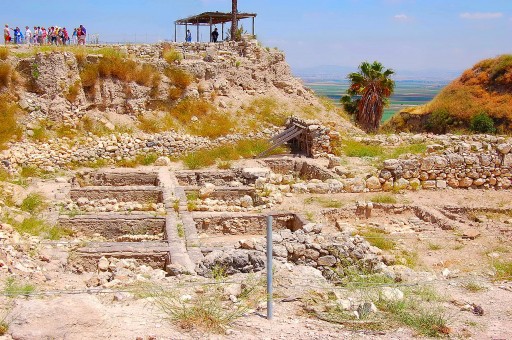 The excavated ruins of the ancient city of Megiddo overlook Israel’s Jezreel Valley. Based on a single ambiguous statement in the Bible, millions of people believe Megiddo and the Jezreel Valley will be the site of a climactic battle between good and evil.

The Jezreel Valley, a triangular inland valley south of the Sea of Galilee, has been part of an important trade route between Egypt and southwest Asian empires for thousands of years. The Romans, who also used the route for military campaigns, called it the “way of the sea.” Competing empires trying to control intercontinental trade have fought at least 34 battles in the Jezreel Valley, the first one in the 15th century B.C. when Pharaoh Thutmose III fought the King of Kadesh. In the 20th century A.D., the allies fought the Ottoman Empire there.

Since about 7,000 B.C., the city of Megiddo has controlled access to the Jezreel Valley. The Bible reports that King Solomon fortified Megiddo, along with the cities of Gezer and Hazor. Excavations at Megiddo have uncovered a 10th century B.C. chambered gate very similar to those found at Hazor and Gezer, lending support to that account. Archaeologists digging through 26 layers of ruins have also found evidence of administrative buildings and storehouses from Solomon’s time and a concealed tunnel built in the ninth century B.C. that gave Megiddo residents access to their water supply during sieges. Megiddo was permanently abandoned after 586 B.C. when the Babylonians captured Jerusalem.

The Book of Revelation reports that unnamed kings will be gathered together at Armageddon just before Jesus’ return, presumably to prepare for battle. The word “Armageddon” is a translation of the Hebrew “har megiddo,” or “mountain of Megiddo,” an apparent reference to the large earthen hill or “tel” that eventually formed over the abandoned Megiddo ruins. Relying on this passage, Christians since the first century have predicted one final battle in the Jezreel Valley, almost always involving the most hated regimes of their eras, from the Romans to Saddam Hussein’s Iraq. The wait goes on.