You are at:Home»Current in Carmel»Holy Cow Cupcakes closing up shop at Carmel’s City Center 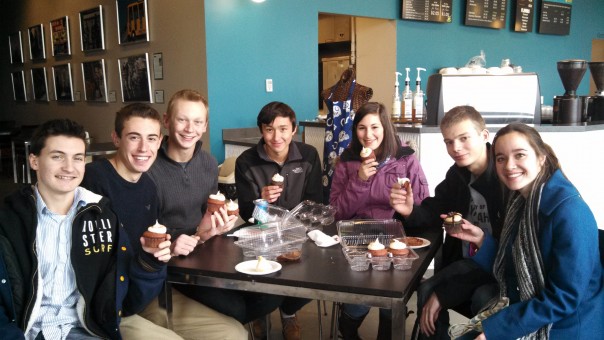 It was sweet while it lasted.

Things at the city center got a little less sugary when Holy Cow Cupcakes closed its doors Jan. 31.

The bakery, located at 61 W. City Center Dr., next door to Divvy, has served its last red velvet cupcake.

On Jan. 30, lines were unexpectedly long and the case nearly empty as news of the closing spread across Facebook and Twitter. Everyone, it seemed, wanted one last bite.

“We had a full case at noon,” said baker Shelly Ray. “Four hours later, it’s all gone. Too bad it hasn’t been this busy all along.”

“I’m devastated that we have to close,” said owner Karen Sutton. “But the market is over-saturated. There are now 36 other cupcake vendors throughout our area, so people have a lot of choices. We used to get every order; now the customer base is just spread out.”

When asked what was next for her, Sutton said, “I’m just going to take a break for a while; we’ll see what’s next.”

Holy Cow Cupcakes started out as a booth in the farmer’s market in 2008. It was the first cupcake purveyor in Carmel and business grew quickly. Sutton moved the business to its most recent retail storefront in city center in July 2011.