You are at:Home»Current in Zionsville»Christmas wish came true 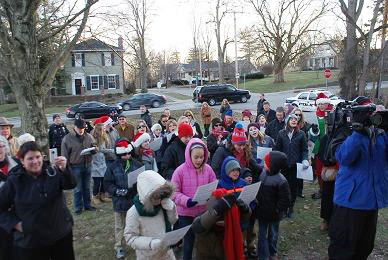 At the VIP Christmas program held Dec. 6 at the Hussey-Mayfield Memorial Public Library for children with special needs, a very special message was delivered to Santa. 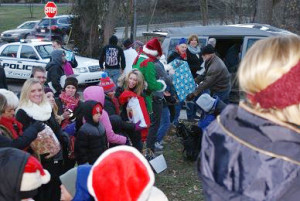 Hawk, 12, had to be pushed in his wheelchair to meet with Santa and be lifted by his mother to sit on Santa’s lap. He couldn’t speak his wish, but was able to type it on his electronic pad and present it. His wish was for this mother’s legs to be better (she needs a knee replacement) and a van to make travel around town easier for his family.

He did not request a toy, candy or anything for himself. The volunteers at the VIP program were so touched by his request, a Facebook campaign with a wish list was launched and the response was overwhelming. Zionsville residents opened their hearts and wallets to make Hawk’s wish come true. In just two weeks, a van was secured, license plates purchased and one year’s insurance was paid.

Residents, businesses and even the Indianapolis Colts provided financial donations for the Zionsville family. Gas cards were donated along with 50-pound bags of dog food for Hawk’s service dog, Mr. Tanner. Since his dog has not been seen by a veterinarian in several years, arrangements were made for Mr. Tanner to be taken for a check-up. Pea Pod grocery gift cards were donated so the family can have necessary groceries delivered, along with gift cards for pizza delivery. Everyday items like laundry detergent also were included. 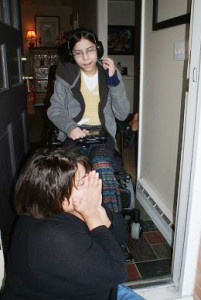 Hawk and his mother, Brenda.

Once all the donations were in place, the group of residents had to decide on how to make the delivery special for the family. Leigh Ann Akard of Akard’s True Value Hardware made a call to the family and said she would like to bring over a holiday dinner. That was the “in” they were wanting for.

A big bow was placed on the van with all the items wrapped and placed inside the van. A fire truck and police car escorted the van to the home. The group surrounded the front of the house and began singing Christmas carols for the family.

“We’ve been so isolated in our house this year, and we don’t know any of these people … what is happening?”

A human assembly line was formed and the gifts were passed from the van until the gifts reached the home.

Hawk wrote on his pad that he didn’t need another Christmas “because this one was so awesome.”

Once the gifts were arranged around their tree, Hawk wrote “Life” on his pad.