You are at:Home»Current in Carmel»Carmel teachers’ contract dispute resolved 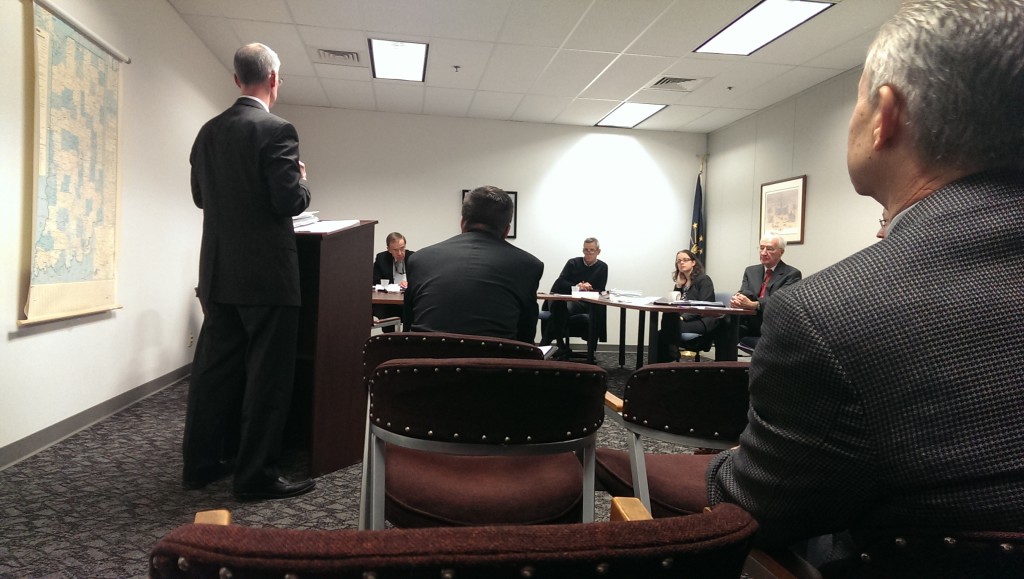 The two members of Indiana Education Employment Relations Board listen to arguments from lawyers for Carmel schools and the Carmel teachers association. (Staff photo)

The Indiana Education Employment Relations Board has ruled that Carmel schools’ “last best offer” contract will apply as the teachers’ contract for the 2012-13 school year.

Carmel Schools Assistant Superintendent Roger McMichael said, “I think our teachers have wanted a determination so we can move forward.”

That lawsuit and its appeals process were recently resolved, and a decision on a 2012-13 contract was sent to a fact-finder after Carmel teachers overwhelmingly voted to reject the administration’s “last best offer” contract.

The fact-finder had determined that a contract proposed by the Carmel schools administration should be applied retroactively for the 2012-13 school year.

The state board upheld the fact-finder’s ruling, but it plans to make additional modifications in a final order to be published Nov. 25.

Those modifications are likely to include:

● A stipulation that allows the administration to set a teacher’s first-time pay.

● A determination that all negotiations be based on the fiscal year from July 1 through June 30.

● A clarification on the terms of the required salary schedule for teachers.

● Removal of portions of the fact-finder’s ruling on paid leave and voluntary actions.

In her October ruling, the reason the fact-finder, Sandra Jensen, said she could not accept the teachers’ proposed version of a contract was because it would exceed the school district’s annual revenue and result in the need for deficit financing.

“The board unilaterally sided with the administration,” Lyday said, noting that teachers had already given up multiple personal days and millions in a bonus pool during the negotiation process.

The contract will give teachers a 2 percent raise but will remove the district’s 1 percent matching contribution to teachers’ retirement plans. Effective and highly-effective teachers also will share a performance bonus pool.

The fact-finder approved contract also did not include a salary schedule. Teachers have typically advanced in salary through a schedule that rewarded experience and higher education.

The order also determined that teachers must rely on individual short-term disability benefits instead of pooling leave days into a communal catastrophic leave bank.

The district’s teachers had been the only ones in the state without a contract.