You are at:Home»Current in Zionsville»Locals headed to national tennis tournament 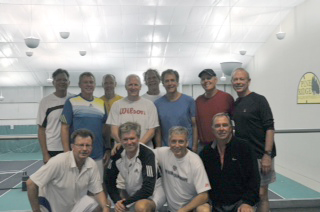 Recently, members from the Men’s 55 and over team based out of the Carmel Racquet Club won the USTA league Midwest Regional tennis tournament in Ft. Wayne, Ind., clinching a spot for them at nationals next April in Scottsdale, Ariz. Zionsville residents Todd Biberdorf and Court Jackson are among the team of players from Carmel, Fishers, Indianapolis, Shelbyville and Louisville.

Coach Dick McKenna shared how these team members have played together in the USTA league for over 28 years.

“What makes us our team special, more so than the individual talent and ability, is the friendship, the respect, the camaraderie, the trust and the selflessness we all share and show each other during these magic carpet rides we take together each year,” McKenna stated.