You are at:Home»Current in Westfield»Jan’s Pizza wins big

Thirty-six pizzerias competed for the coveted title “Best Pizza in the Mid-West,” but it was Westfield’s own Jan’s Village Pizza bringing home the prize. 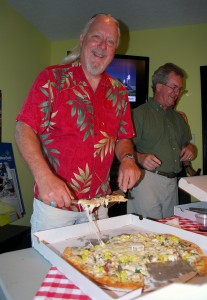 Jan’s Village Pizza owner Steve Miller dishes out a slice of “the Mediterranean” during the Downtown Westfield Association’s Party on the Patio on Aug. 21. (Photo by Robert Herrington)

“It all started with our 15th Annual Pizza Bake-Off on Aug. 5. The winning pizza was created by Michelle Thomas, of the Westfield’s pizzeria.  We put it on the menu and Michelle won $100, and she named her pie, ‘The Mediterranean,’” Steve Miller, owner of Jan’s Village Pizza, said.

Jan’s Manager Garry Brush accompanied the Millers to the Presto Food show and, along with Jan, made the four pies for the contest.

“When trying to decide on which pie should go to the Midwest Pizza Challenge, Garry and I chose the Mediterranean,” Janice Miller said.

Upon receiving the honor, one of the judges told Jan’s representatives that at the end of the first round of voting, The Mediterranean had the highest score ever for the Midwest Pizza Challenge. The high scoring continued in the second round. The prize includes airfare, rooms, accommodations and entrance into the 2014 International Pizza Expo where Jan’s Village Pizza will compete to win best pizza in the nation.

“When we win ‘Best Pizza in North America’ then it’s off to Italy to win best in the world,” Jan said with a big smile.