You are at:Home»Current in Fishers»A tribute 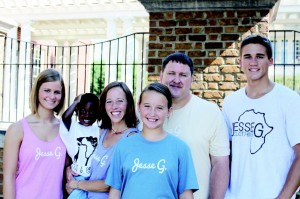 Clothing line gives back to its namesake’s homeland

Area entrepreneurs Hannah Blachly and Riley Rapp had a spark of inspiration while preparing for a trip.

Last winter, the couple from Carmel and Noblesville, respectively, started researching Ethiopia in preparation for a mission trip they returned from earlier this month, and it was during that research they were inspired to do something to the help the people there.

Both interested in fashion, and with a family connection to a screen-printing business, the beginnings of Jesse G. Clothing, a philanthropic line that benefits different “projects” or causes in Ethiopia, were started.

The company’s moniker is a namesake for a friend’s adopted son.

“First off, we wanted to name it Jesse G. to honor Kathy (Craig), her family, and her son Jesse Getiso,” the couple stated via email. “If it weren’t for her inviting us in the first place, Jesse G. Clothing would have never happened.”

A trip to Jesse’s home country with his mother, Craig, would reaffirm their plans.

Craig told Blachly and Rapp about her adopted son, Jesse Getiso Craig, then and would later put a call out for a mission trip and return to his home country – Ethiopia.

“We had Alex (their now 10-year-old daugher), and everything was going great,” Craig said. “We just couldn’t get pregnant again, and so we just felt like God was telling us this was his plan for us, this is his plan for our family.”

The Craigs later turned to adoption, and were particularly called to looking on an international level.

She said her “heart fluttered” when she saw the Ethiopia program for adoption.

Using an agency called All God’s Children International, the process was long and difficult. It took about two-and-a-half years to happen, and Jesse came home to the Craigs the day before Father’s Day in 2011.

After taking trips to finalize bringing Jesse home, Craig said she felt a deep connection with the country and witnessed people living and surviving on the edge.

“I think knowing the choice that Jesse’s birth mama had to make (putting him up for adoption in order for him to survive) really wrecked me also,” she said.

She said she knew she had to go back, and this most recent time, she brought friends, who unbeknownst to her (until May), planned to launch a clothing line with her son as its namesake.

“I think as a teacher I was just so excited that they wanted to do something and that they were putting it into action,” Craig said.

Blachly’s and Rapp’s beliefs and intentions for the clothing line were reaffirmed during the trip, and they decided to take a different take on charitable giving.

Through contacts at an All God’s Children’s orphanage, Hannah’s Hope, Jesse G. Clothing stays appraised of what people in Ethiopian communities need.

Hannah’s Hope is also the orphanage the Craig’s brought Jesse home from.

For two months at a time, the company donates half of the gross profits from each sale to a particular “project,” a cause that is dictated by the actual needs of the people there.

“There’s so many different needs,” Rapp said, “but we keep the same topic – that it’s all for the youth in Ethopia,”

Craig is supportive of Rapp and Blachly.

“I’m just so excited for them, because I feel like they feel – so purposeful,” Craig said. “I think that’s what we all want is to feel purpose and feel like we’re really giving all we got.”