You are at:Home»Current in Carmel»Carmel Community»Nine-year-old chef honored at White House lunch

“Ever since I was old enough to do anything in the kitchen, I’ve been in the kitchen with my mom,” nine-year-old Lydia Finkbeiner said. “I think my first dish was pigs in a blanket – you know, with a hotdog.” 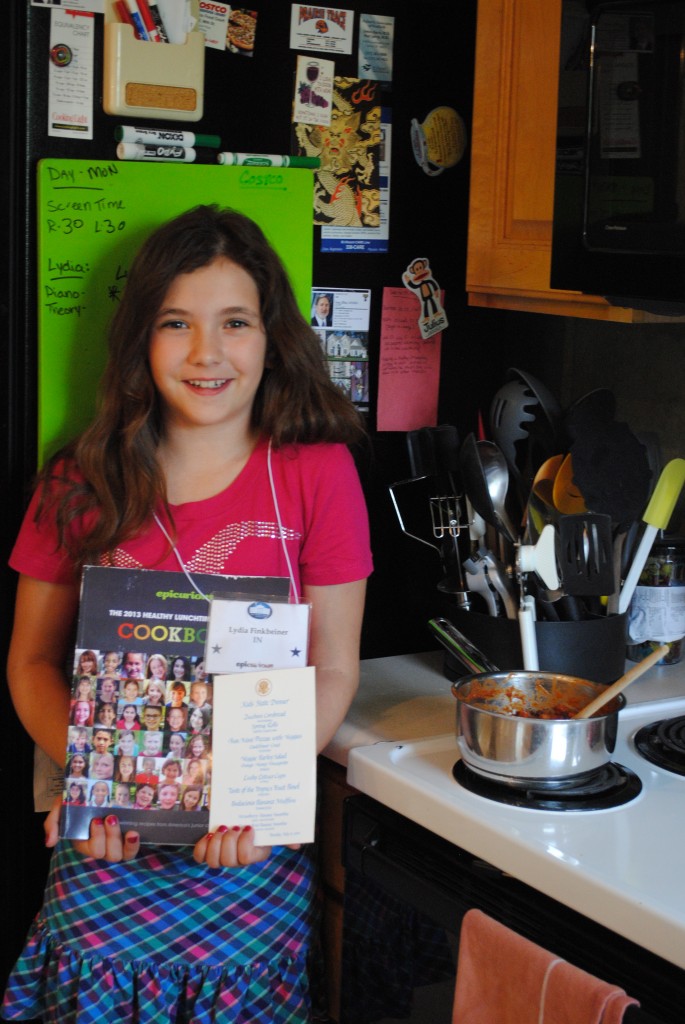 Obviously those culinary skills have evolved during her long years in the kitchen, because Lydia’s own recipe for “Sneaky Chili Surprise” was chosen from among 1,300 entries as one of 54 winners of the First Lady Michelle Obama’s Healthy Lunchtime Challenge, co-sponsored by Epicurious and the Departments of Education and Agriculture. Lydia learned about the contest when her mom, Kristi, was searching for healthy recipes on Epicurious and saw the contest announced.

When asked about the inspiration for her award-winning dish, Lydia said quite emphatically that she knew she wanted to make chili. Why?

Of course. But what makes her chili a sneaky surprise?

“Well,” Lydia said, “I knew I wanted to sneak carrots into the recipe because my brother Ryan hates carrots, and my other brother Matthew doesn’t like anything that Ryan doesn’t like. That’s what makes it ‘sneaky.’ And I knew I wanted to make it vegetarian so my Aunt Tammy could eat it. And I was surprised, because it tasted good. That’s the surprise part.”

Her trip to Washington was certainly inspiring. The group had a guided tour through the food exhibit at the Smithsonian, including a stop in Julia Child’s kitchen. And some of their recipes will be on display in the Smithsonian this year as models for healthy school lunches. The group also got to see the White House garden, and of course, eat lunch with the First Lady. But as they were finishing lunch, they got the surprise of their lives when their hostess’ husband popped in to say hello. President Barack Obama spoke to the group, commending them on their healthy eating habits, and took the time to shake the hands of every person in the room.

Now that she’s back in Carmel, Lydia is back to her usual routine of playing with her cats and watching the Food Network. She used to like Rachel Ray when she was “young,” but now prefers “Food Network Star,” “Restaurant Impossible” and “Chopped.”

And although she would obviously make a great chef someday, she’s keeping her options open:

“Teacher, I think. Or architect. Or artist. No. Teacher. Yes, today it’s teacher,” she said.