You are at:Home»Current in Zionsville»ZPD’s K-9 is reporting for duty

ESO has been officially on-duty since May 20 but was shown a proper officer’s swearing-in ceremony on June 8. 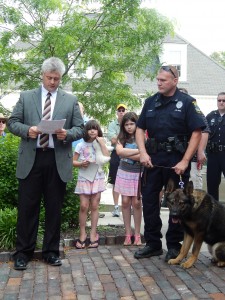 On hand for the special event was Jeff Papa, Town Council president, Robert Knox, chief of police, officer Wayde Knox, ESO’s handler, members of the Chamber of Commerce, and several individuals and residents, most of which have contributed to the fundraising efforts to obtain ESO. He is the Zionsville Police Dept.’s first K-9 unit in more than nine years.

Knox took a moment to thank everyone for coming out and Papa thanked the people and businesses that played a part in bringing a K-9 division to Zionsville. One such honorable mention was Dr. Carey Wasem and his staff at the Zionsville Animal Hospital who is ESO’s official veterinary care provider and will be working with ZPD to keep costs manageable for the K-9 department’s continued needs, including, vaccinations, spaying and neutering, etc.

Several of the businesses came together, under the organization of local business owners Steve Schwarz of Ballerinas and Bruisers and Steve Russo of Russo Communications, and created a fundraising effort on the swearing-in day. They, along with several Zionsville businesses, placed donation jars at their locations for ESO’s fund. The funds will help pay for the cost of maintaining and training him while the ZPD awaits grant support for the on-going maintenance of their K-9 member.

“We, as a community, saw this as an opportunity to show our support to the ZPD and give the people who helped bring officer Knox’s idea to life, a chance to meet ESO and see what their donations went toward,” Schwartz said. “Besides, the kids absolutely loved the event and will remember that day for years to come.”