ORIGINAL HOME: Built in the late 1980s, this home in the Foster Ridge neighborhood on the east side of East Carmel, was due for a remodel. The owners have lived there since 1993 and raised three kids in the home. “The home needed upgrading,” said the homeowner. “We knew we were going to stay in Indiana, and since we like the house and the neighborhood, we decided to remodel.”

DESIGN PHASE: The design team was brought in to redesign the entire first floor as well as the master bathroom. “I wanted a different look, and every room needed attention. It was easier to do everything at once,” the homeowner said. A minimalistic, clean look led the style for the home, including painted white wood work and dark hardwood flooring. Removing walls to create a more open floor plan and repurposing unused rooms were the themes of the final design plan. “We were not using our dining room, so we turned it into an office. We also did not use the formal living room, so we turned that into what we call The Player’s Lounge for games.” 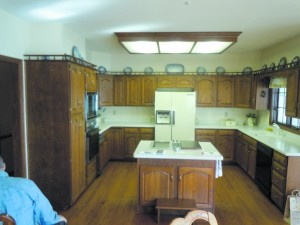 KITCHEN DESIGN: “I wanted the kitchen to be more open and to have more cabinets,” the homeowner said. “The old cabinets seem to just gather dust, so we went for in-laid white cabinetry. We had the soffits removed, and we enlarged the island so it could accommodate both a cook top and a serving area. Removing the half-wall allowed us to bring in a much larger table. We now have new kitchen appliances which are very easy to clean.”

LAUNDRY ROOM:  Like many recent laundry room remodels, the focus was on organization. “Before the remodel, we had open shelving and clutter. We wanted to be able to organize everything into cabinets. We added a refrigerator, which took the place of a closet, so we added cabinetry to take its place.”

MASTER BATHROOM: The project involved replacing a small shower and garden tub with a large shower area. “We have a tub on the same level, so we do not miss the one we had. Also, I wanted more cabinet space, but I really like the look of pedestal sinks.  So, we added wall cabinetry to the bathroom.”