You are at:Home»Current in Fishers»Microphone magic 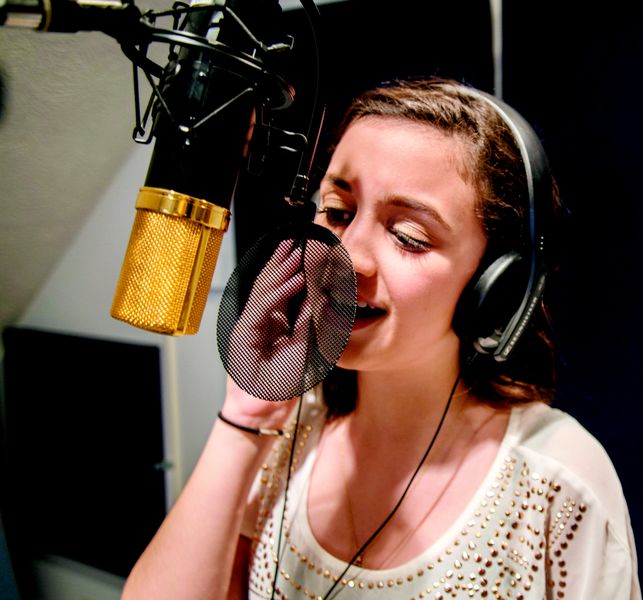 Laura Lavalle, 13, follows in the footsteps of music legends

Ever since she could talk, Laura Lavalle sang.

The 13-year-old Hamilton Southeastern Junior High School student recently took her voice out of the Hoosier state and to a studio and a producer responsible for many of Whitney Houston’s soulful, hit songs, as well as those of Mariah Carey.

“It was really cool, too, because I got to sing into the microphone – actually got to record my whole album on the microphone that Mariah Carey and Whitney Houston used,” she said.

Lavalle spent six days at the end of March and beginning of April on her upcoming album, “Everyday,” at Tarpan Studios, in San Rafael, Calif., working with Grammy-winning producer Narada Michael Walden and Preston Glass, producer of the likes of Earth, Wind & Fire and Whitney Houston.

Lavalle is managed and mentored by Blair Clark. He met Lavalle through the Midwest School of Voice in Carmel.

He worked with Lavalle’s producers, Walden and Glass, on past projects. He worked with her on a demo locally before sending it out to the west coast.

“They’ve all been impressed with her,” Clark said.

Clark said the R&B singer out of sprawling Fishers backs up her voice with hard work.

“Not only is she a phenomenal singer, which God blessed her with, but she has a great work ethic,” he said.

Walking up to the microphone

“I was very taken by her (Lavalle’s) talent,” Walden told Current in Fishers in a phone interview.

She had only a few experiences at a recording studio before stepping up to the mic at Walden’s Tarpan Studios in California.

“But that microphone – it just feels different,” Lavalle said. “It feels clear. It sounds better. You can tell that the microphone’s been used for a lot of years, but it still sounds the same.”

She spent five hours per day for six days in the studio working on her album, “Everyday,” a task she said can be tough if an artist isn’t prepared. That’s not including other work done in between meeting Walden in January and putting down vocal tracks at the end of March.

She said she spent time running to prepare – an exercise that strengthens the diaphragm and helps singers hit the big notes.

Big notes and experiences during the production process varied with the different tracks.

Lavalle originally disliked the album’s title track, hearing pieces of it at a time.

By the time it was completed and her track was laid down, she had a change of heart.

“It was not just because she decided to like it, it was because she worked to do her job, or do her due diligence on the song so that the combination of her song and her skill brought the song together and became one of the top songs in the project,” Clark said.

The beginnings to one song, “Overexposed,” was improvised in the studio when Walden came out of the control room and sat behind piano.

“When he first started playing the chords, I didn’t really know what we were doing,” Lavalle said.

That was 20 minutes after they first met, according to Walden.

A third track strikes close to home. “Worth Every Tear” is about a girl at Lavalle’s school cutting herself, lending strength through lyricism.

Lavalle wants to do big things with her big voice, just like the famed artists who used Walden’s microphone before her.

But she currently plays the balancing act with school here in Indiana.

“It’s hard to balance a career and school at the same time, but I think it’s all going to be worth it in the end,” Lavalle said.

“It’s been a really good experience,” Laurie Dawley, Lavalle’s mother, said. “I hope when she’s older she looks back and says, ‘That was one of the greatest times of my life.’”

Look for “Everyday” in late July or early August of this year.