You are at:Home»Current in Carmel»Carmel Community»Foxy family intrigue now playing 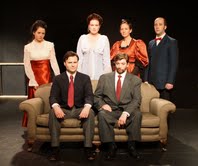 Greed, revenge and blackmail take center stage now through May 12 as the Carmel Community Playhouse presents Lillian Hellmans’  “The Little Foxes,” a classical play about family intrigue that has awed audiences since its first debut in 1939.

“The Little Foxes” is a classical theater piece that takes place in a small town in the deep south during the 1900s – a time when women were still considered property. Sibling rivalry, business deals, thievery; more than two centuries later, audiences are still giving it two thumbs up.

The audience is introduced to the Hubbard family, a dysfunctional family so money hungry they are willing to turn on one another within a split second. Everyone knows there are no secrets in a small town. However, when Regina, the only sister in the family, discovers her brothers Oscar and Ben have been keeping things hidden from her, she threatens to blackmail even the closest of ties.

“I love seeing all the actors make the characters come to life,” Wooldridge said. “Every character has a power struggle. They are always trying to trump one another.”

Also making her first debut on the Carmel Community Players’ stage is actor Addison Ahrendts who plays Alexandra, Regina’s daughter. Ahrendts attends Lutheran High School on the south side and drives 45 minutes for rehearsals. She has worked backstage for other CCP productions but is thrilled to finally get to step into the spotlight.

“I started crying when I found out I received a role,” she said.