You are at:Home»Current in Fishers»Rotarians’ Reach 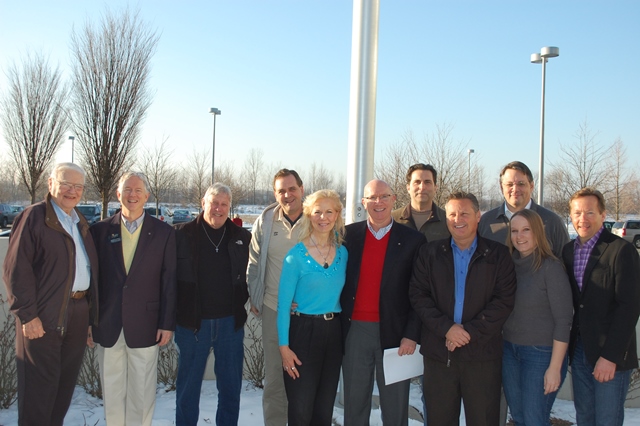 From wells in Sierra Leone to the Indianapolis Motor Speedway, the Fishers Rotary Club impacts the world around them.

Every Friday morning, they pack a room at the FORUM Conference and Events Center, and gleefully line up to sign in for the 7 a.m. meeting, happier than anyone has a right to be at that hour on that day of the week.

The club’s early mornings in its early days were a little bit different.

Leading up to its founding in March 1992, the Fishers Rotary Club met in a local Pizza Hutt.

“Just like everything else in Fishers, we’ve grown,” Don Phalen, a charter member of the club, said.

Mentored early on by the Carmel Rotary Club, the Fishers Rotarians started as a 40-member group. Today they have more than 100 members.

Phalen found out about the club’s founding when he was stuck at home after a tonsillectomy and reading the newspaper.

“On the one hand we didn’t know what we were doing, but on the other hand that was a part of the thing that was really a lot of fun is that we would just try to do a lot of things ,” he said.

In pursuit of their philanthropic goals, the Fishers Rotarians moved into the Eller House and then eventually the River Glen Country Club.

Phelan points out that Fishers was so young that the country club was difficult for many to find and not an ideal location, nor was the train station downtown.

Yet, more than 20 years later, the club is still going strong.

“I think more than anything we have just been blessed with an unbelievable caliber of just people that really have a can-do spirit and just simply are people that dream big,” Phelan said. “They’re not just simply coming and showing up.”

Dreaming big gave the club the ability to reach places others might only imagine.

They hit their stride selling souvenirs at Speedway races, all the while implementing different ideas, eventually branching out to new projects.

Phelan said there wasn’t an idea too crazy for the Rotarians to take on.

He said in the late 90s, the club was assisting a town in Mexico, and one member came up with a unique project to further the cause after riding through northern Indiana.

Crossing through one municipality, the Rotarian found a fire truck for sale and pitched buying it and driving it down to Mexico. It worked.

The trip to Mexico with the fire truck is just one of the far-reaching endeavors the club took on.

A major project for the club is Water Is Life, an initiative that builds wells in Sierra Leone, where water-borne illnesses are a very real problem.

“To be able to help eliminate some of those water-borne illnesses, to allow them to be able to rebuild the country and kind of help them (the people of Sierra Leone) in that regard, it’s just unbelievable,” Phelan said.

Closer to home, the Rotarians support causes in town, Hamilton County and Indianapolis.

The recent Fishers On Tap event at FORUM raised $6,206 for local causes, with a matching grant set to double that, according to one of the event coordinators, Bill Jerrow.

Representatives from eight craft breweries served up their cold beverages to 389 guests, and the club was forced to call the event sold out so they wouldn’t run out of food. It was a 55 percent attendance increase over the inaugural event last summer, with patrons travelling from Indianapolis, Carmel and Noblesville to round out the crowd.

They wouldn’t have had these accomplishments without the involvement of the membership.

Phelan, a financial advisor at Wells Faro, estimates the club members have  put in volunteer time worth $1.8 million at an hourly rate of $15.

As a member and past president, Frank Bruggner has enjoyed fellowship and camaraderie with people that have a philanthropic spirit.

A father of two, Phelan consider the club his third child, and he has a sense of pride after seeing  how far its stretched and the people it’s impacted.