You are at:Home»Current in Westfield»Grand Park makes a grand first impression

While its official opening isn’t until next spring, Westfield’s Grand Park Sports Campus made its debut to the soccer world at the recent National Soccer Coaches Association of America annual convention in Indianapolis, which hosted more than 9,000 officials. 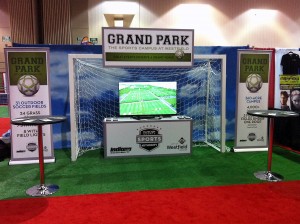 “Grand Park was introduced to the international soccer world,” Westfield Mayor Andy Cook said. “We displayed with hundreds of others, and we got some great exposure.”In addition to its booth at the convention, Grand Park Sports officials and Indiana Soccer Association officials hosted a private reception at the J.W. Marriott for potential sponsors, stakeholders, tournament directors and various “who’s who” in the soccer world. Cook said U.S. Soccer president Sunil Gulati told him, “what an impact (Grand Park) is going to have to the soccer world.” This VIP reception showcased the world-class facility and encouraged coaches to consider making Grand Park Sports Campus their next tournament destination.

“I was surprised at the national and international interest in the facility,” Cook said, adding that he talked with officials from across America, Mexico, Brazil and England. “It showed we did a good job, and we are on the right track.”

When completed in 2014, Grand Park will include 26 baseball diamonds and 31 full-size fields for soccer and other field sports. Cook said Grand Park’s target audience was midlevel youth tournaments. Instead of hosting a championship tournament with eight to 10 teams, Cook said Westfield was looking at regional tournaments with 200 teams.

Carmel resident Ersal Ozdemir announced in January that he planned to bring a professional soccer team to Indianapolis in 2014. While the team will be playing its games in Indianapolis, Cook said smaller tournaments, exhibition games and clinics might be held in Westfield.

“They very much want to be invested in Grand Park,” Cook said. “The presence of professional teams will have some huge benefits for us.”

As Grand Park moves forward, Cook said the bids for the artificial turf fields recently came in within budget. The fields will be installed this spring. The project is also receiving bids for seeding and sodding of the natural fields, which also will occur this spring.