You are at:Home»Current in Westfield»In honor of a friend 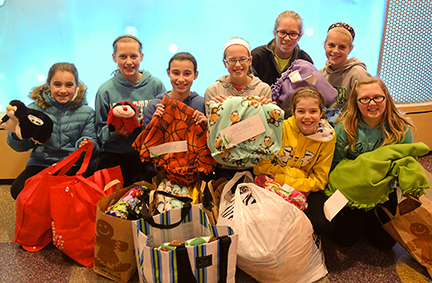 As children ran outside for recess at Oak Trace Elementary School two years ago, six fourth-graders gathered for a self-organized meeting. The group called themselves Key Chains for Kindness and they sold handcrafted key chains to raise money for a close friend, Spencer Lancaster, who was diagnosed with brain cancer in 2007.

Teresa Gift, Abby’s mother, drove the girls to the store for supplies or to events where they raised money.

“We really enjoyed doing it,” the young Gift said. “It gave us a sense of responsibility, and it was something to do outside of school.”

Key Chains for Kindness spent the proceeds on gift cards for the Lancaster family. Gift said she hoped the Lancasters created memorable moments in those last few months they had with their son, who passed away in August 2011.

With Spencer’s passing and the girls entering fifth grade, the meetings during recess stopped. Now in sixth grade, Gift wants to “revive the business” and continue supporting children fighting cancer.

The group now has a new name: Crafts for Courage. Three more girls – Kaiah Haberkorn, Rebekah Davidson and Allison Hendrix – also joined the group. With nine girls, each specializing in a certain craft, they hope to raise more money to make blankets for the Peyton Manning Children’s Hospital at St. Vincent. They made 31 blankets on Nov. 25 and delivered them earlier this month.

“The point of the blankets is to give (the children) something warm so they have something comforting while they are going through hard times,” Gift said.

Gift made 31 butterfly ties, a pin with craft lace tied around it to make it look like a butterfly. She created them in honor of Lancaster, who loved the carefree, colorful insect. On each of the 31 blankets, Gift placed a butterfly tie and a special poem in memory of her friend, which read:

“We give you this blanket to fill you with warmth

When we know you are probably scared

We know you are filled with great strength

And with this in your arms, you will know that we cared.

Donated in memory of Spencer Lancaster”

“The thing that I have enjoyed about this is it wasn’t a parent saying, ‘I think this is something you should do.’ It was developed on their own,” Gift’s mother said. “They’ve really been self-motivated.”

The ultimate goal is for the girls to make a variety of items to sell: key chains, duct tape wallets, scarves, bracelets and butterfly ties. With more money, they will buy more fleece and donate more blankets, Gift’s mother said.

Olivia Beardslee, who will be designing a sample book of all the items to sell, said the group had looked into more events where they could sell Crafts for Courage. With hopeful ideas, some creativity and support from parents, the girls hope their donations will support children going through treatments at the hospital.

“We want it all to be donated in honor of (Lancaster) because he was really special to us,” Gift said.