You are at:Home»Current in Zionsville»Home cooking 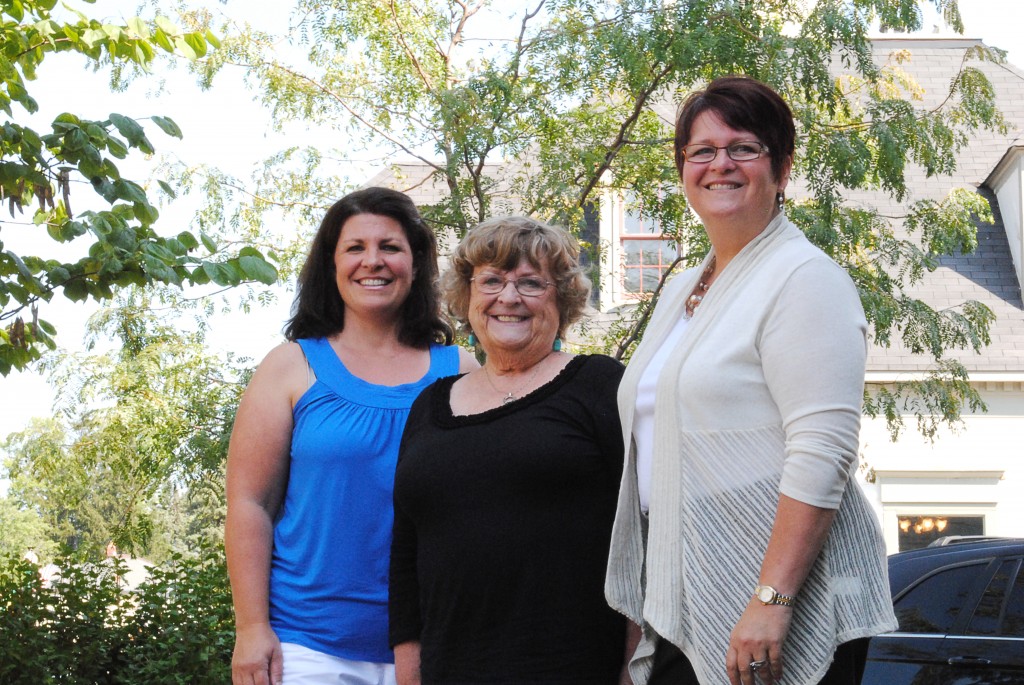 From left, Hamed, Garrett, and Rohrman. (Photo by Derek Fisher)

It’s a tradition in some circles, and is certainly not unheard of in many others, for families to get together on Sundays. Whether the focus of the gathering is food, fun, faith, or some combination thereof, the collection of kin on the Sabbath is commonplace.

However, what’s not very common is what Zionsville’s Garrett family began doing with their Sundays just two years ago. They wrote a book. More specifically, they wrote a cookbook.

It was a cookbook unlike any other.

“We wanted to do something that everyone could identify with,” said Peggy Rohrman, the leader of the familial trio, which also consists of her mother, Sally Garrett, and sister, Laurie Hamed, who authored the book. “We wanted something about the essence of who we are, and what we can teach our children about who they are. We wanted a legacy project.” 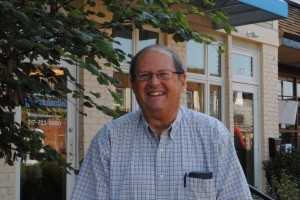 The result was Hand Me Down Heart, a nearly 200-page piece that is less cookbook, and more comfort book. The 100-plus recipes it contains seem almost incidental, given the heartwarming nature of the remaining content. Most of the pages are adorned with photos and anecdotes – family treasures passed along to Sally, Laurie and Peggy by a network of nearly 30 relatives and close friends.

“They didn’t want another ringed cookbook with tabs,” Mike Garrett said of the desires of his wife and two daughters for their year-long project. “They wanted to have something they would truly be proud of, which would be the legacy of the family.”

The legacy aspect, the documentation and preservation of history facet of Hand Me Down Heart, came about naturally. Sally had just been given a clean bill of health after a bout with cancer, and Peggy was enduring chemotherapy after also being diagnosed with the disease. 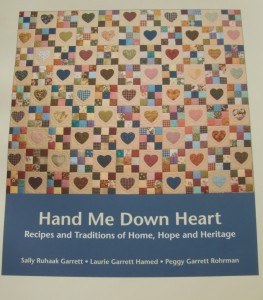 “They knew there were things they wanted to pass along to their families,” said Mike. “That’s how it is when you’re faced with those kinds of things.”

After originally planning to write a business book with her down time during treatments, Peggy, a banker in Zionsville who is now cancer-free, felt directed down a different path.

“During chemo, I would sit through four to six-hour sessions and work on my computer,” she said. “As I talked about (the cookbook idea) with friends and family, most people had things they wanted to contribute. So the project grew to a broader thing.”

“We’re an extremely close family,” said Sally. “We began by collecting recipes, and I had recipes from my mother, Mike’s mother, and my grandparents. We contacted people and friends and asked if they wanted to join in on the project, and we had a very successful turnout.”

And so it was, for nearly a calendar year, with Mike observing on the periphery, the three women were sorting, listing, writing and laying out what would eventually be the IBJ Custom Publishing-released book. Peggy directed the show, Sally did the copy work, and Laurie took on the role of architect, piecing together the look of each page.

“It brought a lot of memories back,” Laurie said of the process, later adding that she just recently pulled her copy of the book off the shelf to dig out recipes for her two children. “We took to the work not knowing what we were doing. Things kind of fell into place; it was challenging, but it was encouraging.”

The book also incorporates a quilt theme as a result of a partnership with an Amish store in Lancaster, Pennsylvania. “The interweaving of family things in the book ties into the quilt idea,” said Laurie.

Once the book was complete, the group went about having signings and doing speaking engagements, which is something that continues to this day. There is enough content left over, the group says, for two more books; the second may be released as early as next spring.

However, it will be hard for Sally to top the overriding theme of the trio’s initial effort.

“There’s just a closeness. It’s an intergenerational story of love,” she said. “I think people seek the feeling of home more than anything; family and home are the most wonderful words in the vocabulary and that’s the theme we wanted. People relate to this book wonderfully. It provides stories of love and friendship and caring and sharing. It’s warm and cozy.”