You are at:Home»Current in Westfield»WMS students give glimpse into the future 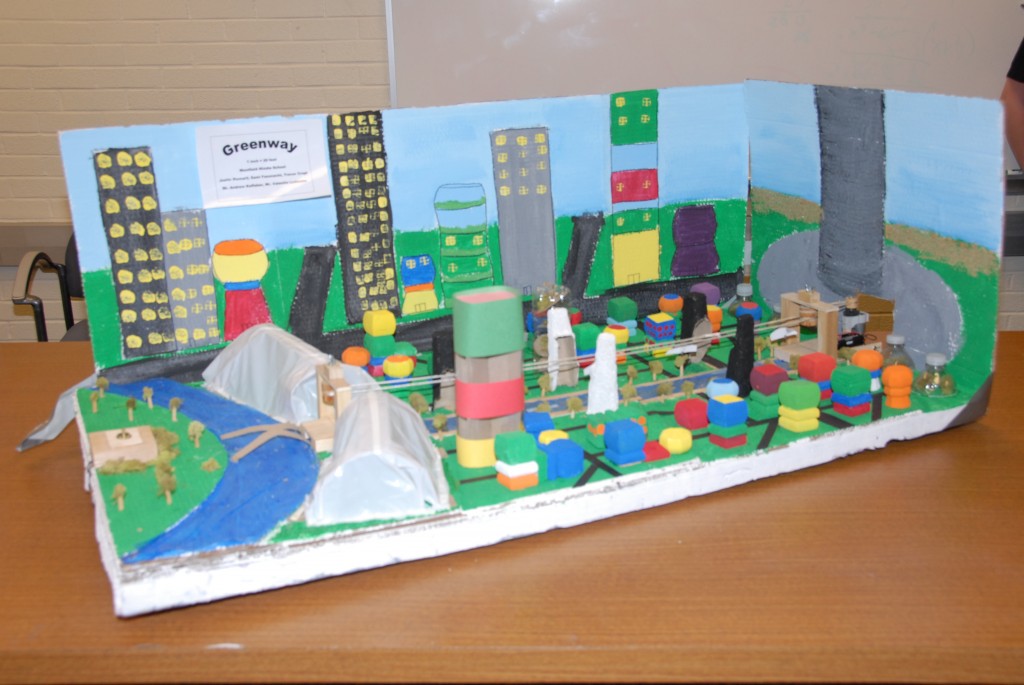 A group of Westfield Middle School seventh- and eighth-grade students are taking a step into the future, and according to the judge’s panel at Future City, the students are walkingin the right direction.

Future City is held every year at Indiana University-Purdue University Fort Wayne.Each state has its own regional competition. The winner of each region gets an all-expense paid trip to Washington, D.C., for the national championship. The national champion gets a trip to the Alabama Space Camp.

Andrew Keffaber, WMS science teacher and academic team coach, said the academic team began with 20 students and was narrowed down to a final teamof eight, named the Greenway Team. They worked on the project presented at the event, hosted in Fort Wayne, as part of National Engineers Week Foundation.

Participating teams displayed designs for fully-functional sim cities, and presented materials, such asnarratives describing their cities, a research essay on a sustainable energy source and a small-scale model of their cities.

Keffabersaid the student-organized academic team completed a competition of its own before even reaching the regional competition in Fort Wayne.

According to Keffaber, the 20 student members were separated into three student-organized academic teams. The teams competed against each other; the Greenway Teamwas theonly team to meet deadlines.

WMS’sGreenway Academic Team presented its final project to judges in engineering-related fields, including the head engineering professor for Indiana University-Purdue University Fort Wayne, executive at Indiana Michigan Power, the city planner for Fort Wayne and the civil engineer for IPFW.

Keffaber said finalistswho entered the final judging round were in a unique environment.

“The final presentation was in an auditorium with the judges on stage, and more than 500 people in the audience,” Keffaber said.

According to Keffaber,developing and presenting the project was just one of the components to the whole experience.

“It challenges students and it allows them to be creative,” Keffaber said “The competition is great, and there is no other opportunity where students can be evaluated and work with high-level expertise.”

Keffaber said the WMS students’ thorough understanding and out-of-the-box thinking caught the eyes of the judges.

“Our sim city was above and beyond the rest of the competition. The judges specifically wanted to talk with our students about how they created their virtual model,” Keffaber said. “Their dedication to research and the ability to answer a wide range of questions from the judges helped them score very well.”