You are at:Home»Current in Carmel»Refs, umps, grout: Unnoticed unless … 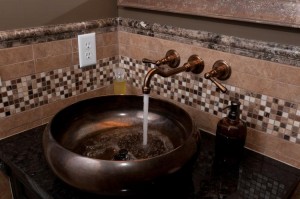 I can’t think of a single time one of our custom home-improvement customers looked at a finished tiling job – whether floor or wall, kitchen or bath – and their first comment was, “Wow, that’s outstanding grout!”

No, they notice the tile’s material, texture, color and pattern. They experience the positive energy of the tile’s visual, functional and design elements. They bask in the freshness of a new look and feel in an area of their home. They say, “Wow!”

Grout, while critical to the appearance and function of a good tiling job, usually isn’t part of that initial “Wow!” equation. In fact, grout can be compared with basketball referees or baseball umpires: They are generally only noticed when they aren’t perfect.

Early last summer, we redesigned and rebuilt a walk-in, tiled master bath shower in a very nice north side Indianapolis home. The finished shower (grout, too) looked great, was completed on time and on budget and the customers wrote a nice letter to Angie’s List … kudos to all.

Then in December, the homeowners noticed the grout in their newly-tiled shower floor was disappearing in spots … big spots. They called us, we immediately traced both the materials used and who did the installation, reviewed all the information we had and realized this specific batch of commercially-manufactured grout had, for reasons we still don’t know and probably never will, failed.

So, we completely removed and reinstalled the grout. The homeowners noted their appreciation we didn’t just put new grout on top of the old, or try to blame the grout and claim our innocence, or bill them for the do-over.

What I like about the story is these homeowners knew who they were working with, knew who to contact with questions or problems, and when the need arose, were professionally responded to with a responsible solution.

That was a good call.

INSIDE & OUT
By David Decker