His series concludes with “From Bethlehem to Carmel,” which covers the time period 1822–1899. The book was released earlier this month. 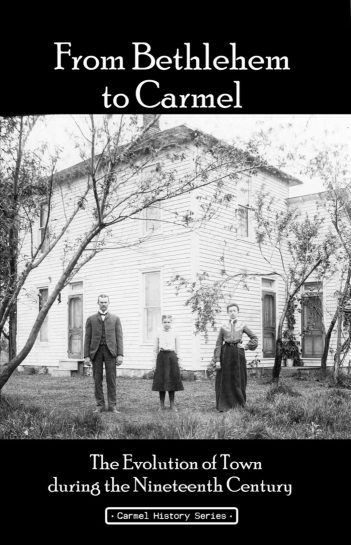 “From Bethlehem to Carmel” is the 11th and final book by Carmel Clay Historical Society historian Andrew Wright. (Photo courtesy of CCHS)

“From Bethlehem to Carmel” begins with a chapter on the city’s Quaker roots. Quakers founded the Town of Bethlehem, now called Carmel, in 1837, but renamed it in 1846 because there was already a post office in Bethlehem, Ind., which is on the Ohio River 25 miles northeast of Louisville. Wright said when the town incorporated in 1874, it did so as Carmel.

Wright’s book project began in 2016 with the goal of thoroughly researching the history of Carmel and Clay Township.

“It was supposed to be one book, but we wanted to get these stories out there, as we knew it would be years before the project was finished,” Wright said. “We published each story in our newsletters as we completed them. Then the stories started to get longer, and we moved away from print newsletters, so we started to make small books in limited print runs. The project snowballed, and now we have 11 books.

“I think now that we have collected the stories, we’ll discontinue some of the books and combine them into the single Carmel history book we had originally intended, after we take a break. It’s been a long process.”

Wright said perhaps his favorite story from the final book was that of Joseph Duffy, who was born into slavery in Georgia in 1841.

“When General William T. Sherman began his March to the Sea from Atlanta to Savannah in November 1864, Joseph left his master’s property and entered the camp of the 12th Illinois Infantry,” Wright said. “He enlisted and became a free man. Over the next six months, he marched a thousand miles all over the South with the Union Army until the war’s end.”

While serving with his unit in 1865 in Louisville, Duffy met Sibbie Ann Richardson, who had also been enslaved. They married in 1869 and moved to the Nora area the following year.

“In 1882, the Duffys moved to Carmel’s east side, where Joseph and Sibbie Ann lived the remainder of their lives. Both are buried in the Farley Cemetery at 106th and Keystone,” Wright said. “Joseph’s story gives us a way to understand and talk about slavery from the perspective of someone who had been enslaved that we did not have before.”

Wright also said there were several stories of political tension that echo today.

“Following the Civil War, the country was politically divided, not just North and South, but from one neighborhood to the next within the township,” he said. “John F. Haines was born in the little town of Gray on Carmel’s northeast side in 1856. He wrote about the big political rallies that took place in the county following the war and how Republicans and Democrats would brawl and chase each other from the polls on Election Day. The political tension culminated in an absurd battle over an American flag that was flown at School No. 4 on Clay Township’s southwest side in 1892.”

Wright said one of the town’s most distinctive features in the late 1800s was its shade trees.

“The summer after John F. Mendenhall graduated high school in 1866, he organized some friends and neighbors to plant trees all along the streets of Carmel,” Wright said. “After several decades, the trees matured and formed shady archways over the streets. The shade trees were what the tiny town was known for until the town board passed an ordinance in 1920 that required the removal of all branches and limbs that cast a shadow on the streets. Mendenhall was also largely responsible for getting the Monon located through Carmel.”

The book is available for purchase at carmelclayhistory.org/carmel-books.