You are at:Home»Current in Carmel»Carmel Cover Stories»The greatest gift: After years of medical setbacks, mom of 5 finds strength in blessing others

For Jill Olecki, losing both of her legs wasn’t nearly the most difficult challenge she faced in the last three years.

Despite multiple cancer diagnoses, months she doesn’t remember, a totaled van and two amputations, the mother of five said being away from her children was the hardest battle to face.

“With COVID, there were huge amounts of time they couldn’t come (to the hospital) at all,” Olecki said. “Thank God for Facetime, especially when I was in for months this past year. I didn’t get to see them but maybe once under special permission. That was super hard for me.”

So, this holiday season has been extra special for Olecki, who is embracing every minute with her husband and children, who range from age 4 to 14. After all, it was on Thanksgiving in 2021 that she was rushed to the hospital for what would turn out to be a five-month stay. She doesn’t remember much of it, including last year’s Christmas and New Year’s celebrations.

“This year, experiencing (the holidays) is such a gift, one not to be taken for granted,” Olecki said. “I’m going to do my best to stay healthy to keep it going.”

Olecki, 40, grew up in a military family stationed in Terre Haute. She graduated from Terre Haute South Vigo High School and Rose-Hulman Institute of Technology, where she studied mechanical engineering and met her husband, Dave. Olecki moved to Carmel in 2004, and approximately five years ago she and her family moved to Westfield. They are active in the Our Lady of Mt. Carmel and Holy Rosary parishes in Carmel and Indianapolis, respectively.

In February 2019, Olecki, who hadn’t been feeling right for a while, started experiencing severe back pain during a workout. Trips to an urgent care center and emergency room didn’t provide answers, but an eventual MRI revealed a compression fracture in her spine, an injury typically seen in elderly patients, Olecki said.

Soon, she was diagnosed with non-Hodgkins lymphoma, a cancer that originates in the lymphatic system and can spread to other parts of the body. Treatment included several weeklong chemotherapy treatments and a stem cell transplant using her own cells.

For a time, it appeared her recovery was going well, but the following spring she began to experience headaches, foot drop and other “weird symptoms,” Olecki said. For the second time in two years, she was diagnosed with lymphoma, this time a version that affects the central nervous system. Olecki said it isn’t clear whether treatment from her first diagnosis failed to remove all the cancer or if it popped up independently.

“It wasn’t big tumors. It was more like sprinkling in different places of my body,” said Olecki, who lost vision in her right eye as a result.

This time, treatment involved altering some of Olecki’s T cells in a laboratory to fight the disease that had invaded her body. The process removed the cancer from her central nervous system, but eventually an MRI showed it had returned to her upper spine, where it initially appeared. Donor cells successfully treated the recurrence.

A couple of months later, Olecki returned to the hospital with graft versus host disease, as the transplanted donor cells began to attack her body. She received treatment and returned home until Thanksgiving, when she became unresponsive after battling a fever and chills. 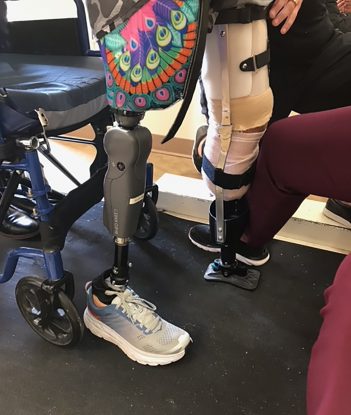 Jill Olecki has had to learn to walk as a double-amputee. (Photo courtesy of Jill Olecki)

She doesn’t remember much of what happened next, but Olecki said it’s a miracle she made it out of the hospital, as she was intubated three times and nearly died twice. When she finally went home in April, she still had sores on her legs that didn’t appear to be healing. Doctors discovered bacteria inside the knee bone of her right leg, which they recommended treating through amputation. She underwent the procedure in mid-April.

“Once I got that infection out of my bones through the first amputation, I felt so much better,” Olecki said.

In the following months, with little improvement on the left leg, doctors told her they could try a treatment – that wasn’t guaranteed to work – that would require her to stay off the leg for a year, or they could amputate, and she’d likely be walking again within months. Olecki chose the latter and had her left leg amputated at the end of August.

“As of right now, we have no evidence of cancer,” Olecki said. “I’m just dealing with the aftermath.”

Megan O’Connor, who met Olecki through an exercise class when their oldest children were babies, said it’s been difficult to watch her friend suffer so many setbacks. At the same time, Olecki has been an inspiration, she said.

“It’s been heartbreaking for everybody close to her, because she’s just a good person and she loves her family so much. It seems like she keeps getting one difficulty after another,” said O’Connor, a Westfield resident. “But it’s also been really inspiring to watch her, because her faith in God is so unwavering. She works so hard at everything because she wants to get back to being with her family and doing regular mom stuff.”

Returning to normalcy got a little easier Aug. 28 – two days before the second amputation – when the St. Nicholas Neighbor in Need Foundation presented the Olecki family with a wheelchair-accessible van the nonprofit purchased after raising more than $125,000 in donations, which also helped fund renovations to make the family’s home more accessible.

The family’s need for the van became more urgent in July after their van was T-boned during a vacation in Michigan. Olecki wasn’t in it, as she was hospitalized from an illness, and fortunately her family members in the van were not seriously injured. The vehicle, however, was totaled.

The van is but one of many blessings – including three years of nearly every meal being provided by a friend or community member – poured on her family since Olecki first became sick. Though she has many reasons to mourn what she’s lost, Olecki instead has chosen a heart of gratitude.

“There are days when I’m tempted to despair, but I think about all these people who are rooting for us and praying for us,” Olecki said. “As hard as whatever it is that day I’m going through, God is still keeping me here for something. It helps me to keep fighting and to be here for my kids, to try to trust in Him and share that trust and perseverance with my family and the community. There’s a reason I’m going through this, and my family is going through this. I might not know on this side of heaven, but in the meantime, I’ll keep praying and keep fighting.” 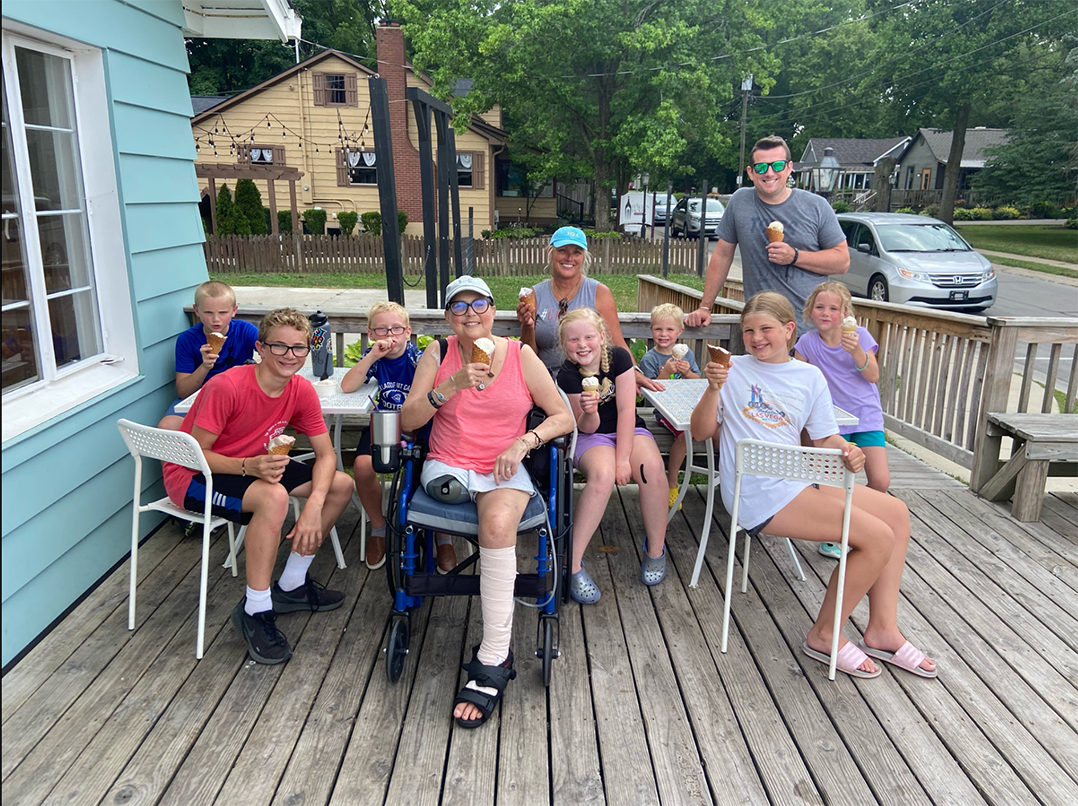 The gift of prayer

Jill Olecki has felt strengthened by the prayers and support of her community over the past three years, and she’s doing her part to bless others, as well.

Even when she’s been confined to a hospital bed, she’s kept an updated list of needs so she can pray for and encourage others in her community.

“It helps me realize there are a lot of people going through all kinds of difficulties. It’s not just me,” Olecki said. “It helps me to pray for them. In that way it’s been such a gift to deepen my faith.”

Olecki’s longtime friend Megan O’Connor said Olecki’s faith and positivity have been an inspiration for many.

“Even when she’s been really, really sick, she’s always asking other people if she can pray for them, offering up her suffering for other people,” O’Connor said.