Work will soon be underway on a major road improvement project along Pleasant Street that is expected to improve traffic flow and ease congestion in Noblesville under the first of several phases planned over the next few years.

City and county leaders held a groundbreaking ceremony Nov. 14 at 17330 River Rd. to mark the beginning of Reimagine Pleasant Street, which will be completed in three phases and is estimated to cost more than $100 million. The first phase will span 1.1 miles west of River Road to 10th Street and includes planned work by Hamilton County for a bridge to be built over the White River.

“I stand here on the shoulders of many, many, many people who came before me, and it’s our No. 1 priority from our administration’s perspective, and we believe it will transform the City of Noblesville,” Jensen said.

Jensen said one of the major goals of the project is to not only improve east and west connectivity through the city, but to ensure that police and fire responders can get to scenes quickly as Noblesville continues to grow. In addition, the project has been discussed as a way to expand the city’s economic footprint, he added.

“We’ve talked about it in terms of making sure that folks who want to get to downtown can do so in an easier and more traffic-calming way, whether that be by car, by foot or by bike,” Jensen said. 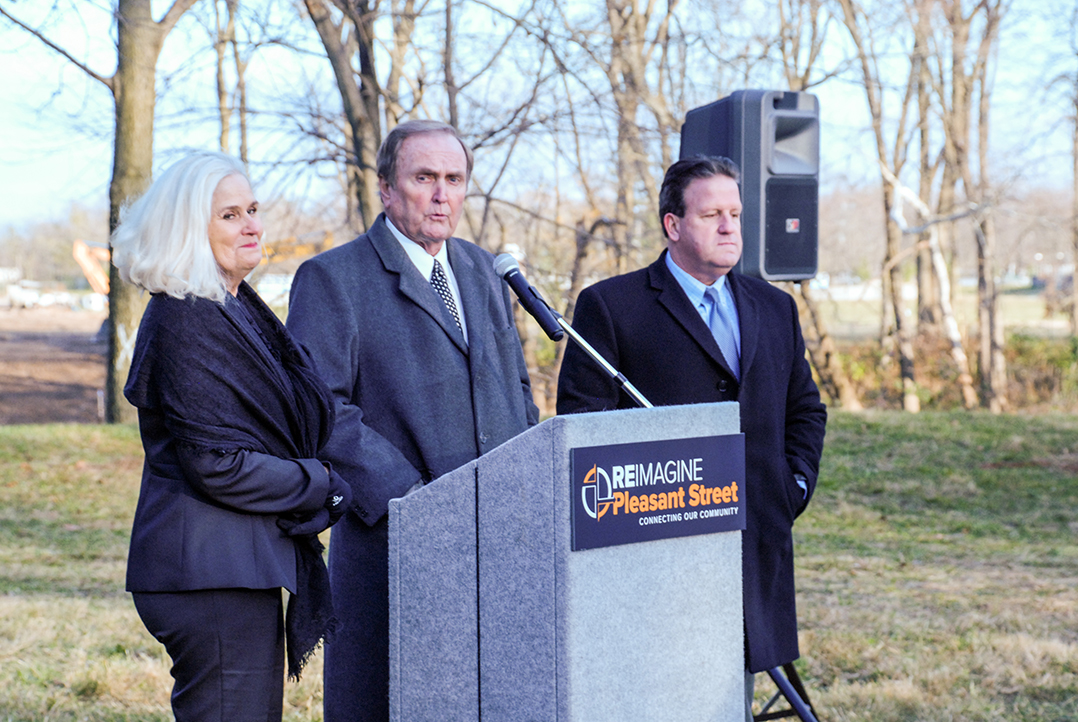 Jensen also thanked Hamilton County Commissioners Steve Dillinger, Mark Heirbrandt and Christine Altman for their support in the project, noting that Hamilton County is a key partner in the project as well. The county is funding its portion of the project for a new bridge over the White River under the first phase, which is expected to be open to traffic by the end of 2024.

Jensen added that the project will also bring other benefits when it is completed, noting that it is not just about improving traffic flow, but also to expand Noblesville’s footprint in the community.

“Not only will it be an east-to-west corridor flowing through the city, but it will also be the Midland Trace Trail that will allow folks to connect to downtown Westfield all the way to Noblesville,” Jensen said.

Dillinger expressed his appreciation on behalf of the commissioners and said it takes “a lot of governmental coordination” for a project such as Reimagine Pleasant Street to happen. Jensen also thanked City Engineer Ali Krupski and her team for their work, saying they have been “phenomenal in some of the headwinds we have experienced.”

“This is a great day for our city and I’m looking forward to even greater days as we move forward,” he said.

Although the public likely won’t see any major work taking place during the winter months, Jensen said motorists can anticipate different intersection improvements and utility relocations occurring in the spring, with full construction taking place by next summer.

Phase 2 of Reimagine Pleasant Street will involve work from 10th Street to Ind. 37, while the final phase will be from River Road to Hague Road. The entire project is expected to be finished by the fall of 2025, according to the city.

Jensen said when the entire project is completed, it will allow for better access to downtown Noblesville, along with easier access from the east to west, which he noted will be a benefit for the city, county and region as a whole. Still, he warned the public that it can expect “inconveniences along the way” as the project takes shape.

“This is a construction project unlike what we’ve ever seen in the City of Noblesville, so we know there will be some pain points there, but our goal is to communicate as much as possible with residents, so we ask them to be patient with us and just be patient and know it will be a benefit to our entire community once it’s done,” Jensen said.

What to know about Reimagine Pleasant Street

The first phase is the most critical for improving traffic flow and easing congestion on Ind. 32, according to the city. That phase, which will include a new bridge over the White River that is being funded by Hamilton County, will be open to traffic by the end of 2024. Phase 2 of Reimagine Pleasant Street will involve work from 10th Street to Ind. 37, while the final phase will be from River Road to Hague Road. The entire project is expected to be finished by the fall of 2025, according to the city. For more, visit reimaginepleasantst.com.