Emma Rund had one major reason for choosing to direct “Legally Blonde, The Musical for Fishers High School’s musical.

She said she chose the play because it has many characters and singing roles that allowed her to give as many opportunities as possible to students. Along with directing both the musical and the play, Rund also teaches all the acting courses at FHS. “Legally Blonde” will be her first show at the school. 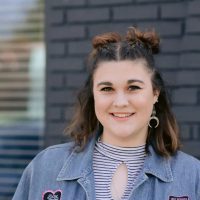 The performances are 7 p.m. Nov 17-19 at FHS,13000 Promise Rd. Rund said the musical is based on the 2001 movie, “Legally Blonde,” which starred Reese Witherspoon. It was later made into a musical.

The lead performers are Grace Mandel, who will play Elle Woods, and Trey Weger, who plays Emmett.

“It’s about Elle Woods who, unfortunately, gets broken up with and decides she wants to win her boyfriend back,” Rund said. “She decides to get herself into Harvard law (school) and on her journey, she figures out that she doesn’t need a man to be successful and learns about self-love in the process. It’s also a well-known show. I wanted a lot of kids to audition so they could see who I am and work with me and want to audition again.”

Tickets for Legally Blonde the Musical can be purchased at purplepass.com/#241765.