The Studio Theater in Carmel is the quaintest of musical venues, seating approximately 200 spectators.

At 7:30 p.m. Oct. 8, the Indiana Wind Symphony takes center stage at Studio Theater in Carmel with “A Procession, a Festival and a Sinfonia,” seven pieces showcasing anywhere from six to 24 musicians playing at once. 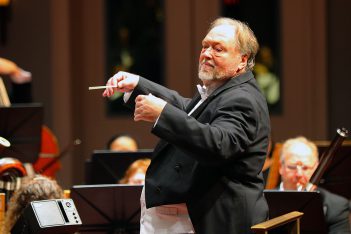 “It puts us in the intimate setting of the Studio Theater,” said Charles Conrad, musical director of the Indiana Wind Symphony. “Literally, the front row is six feet away from me, the conductor. I can look right into the eyes of the people in front of me. I don’t even use a microphone.”

Conrad, however, won’t be conducting. He continues to recover from surgery on his right eye to replace a detached retina. IWS’s concert featuring film score composer John Williams’ music set for Sept. 25 was postponed because of the surgery.

Taking the baton will be Darin Sorley, director of the Indiana Brass Choir.

The pieces to be performed are, in order, “Concerto for 23 Winds,”,“Music for the Temple of the Night” and “Zephyrus” before a short intermission. After that, it’s “Sinfonietta in d minor,” “Second Suite” and “Elsa’s Procession to the Cathedral.”

A recently discovered march from 1928 by Fred Jewell, the famous composer who hailed from tiny Worthington, Ind, who died in 1936, will close the show. Interestingly, Jewell served as musical director for the Ringling Bros. and Barnum & Bailey Circus from 1908 to 1911.

Although his vantage point will be much different, Conrad looks forward to the show.

“Our chamber concerts are genuinely unique because we’re really the only group in the area that does this,” Conrad said. “Just the fact we play a repertoire that never gets played, that’s the reason we created this series. It’s really Grade A music. In a sense, they wrote for smaller performing ensembles.”