Abney is now the Eagles’ 6-5, 215-pound starting senior quarterback and headed to play for Ball State University in 2023.

“He definitely dedicated himself to the weight room and in the offseason to the strength and movement development and the things we do,” ZCHS football coach Scott Turnquist said. “He dedicated himself to preparing his body and his mind as well to perform at a high level.”

Abney, who said he had his growth spurt as a freshman, became the Eagles’ starter in 2021. After playing in the first three games, he suffered a broken collarbone and didn’t return until the final regular season game, seeing limited action. He then shared duties with Luke Murphy for the first few postseason games. 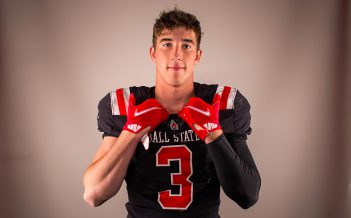 “Although the injury was tough, I was pleased with how I was able to come back and finish the season,” Abney said.

“He fit right in and then the injury (happened), which would be adversity for anybody,” Turnquist said. “But he took it in stride and remained a steady influence on the team, even though he couldn’t be out there playing. He and Luke would split time, which was beneficial for us as a team. It was nice to see him weather that storm and come out the other side in a really positive manner.”

Last season, Abney completed 70 of 126 passes for 1,006 yards with 11 TDs and two interceptions for the Eagles (9-6). He rushed for 184 yards on 58 carries and seven TDs last season. Zionsville reached the Class 5A state championship game before losing to Cathedral for the second consecutive year.

“Postseason success definitely made me hungry for more, and my past postseason experiences will definitely be fuel for this year,” Abney said.

Turnquist said Abney is dealing with a younger group on offense this season.

“He’s surrounded by players who are new and developing,” Turnquist said. “The biggest thing I’m proud of him is hanging in there through the difficult times, not just through the great times. He’s being a leader and keeps guys positive.”

Through the first three games this season, Abney had completed 41 of 87 passes for 484 yards with five touchdowns and five interceptions. He has 63 yards rushing on 19 carries, including a TD.

“My size and speed work to my advantage as they help me put more stress on defenses as a running threat,” Abney said.

Turnquist said Ball State was attracted to his strong arm and athleticism.

“You can always find a place for guys like that, especially when a kid like that has a great attitude,” he said.

Abney said growing up he tried many sports but made football his No. 1 sport as he got older. He played receiver and tight end before switching to quarterback around seventh grade, he said.

Ball State was Abney’s first major scholarship offer, and he committed shortly after in June.

“The thing that attracted me to commit to Ball State was the culture of the program,” Abney said.