For Dr. Peter Maiers, treating elite athletes as the head team physician of the Indianapolis Colts isn’t all that different from working with more traditional patients in his regular practice.

Whether it’s a sprained ACL resulting from a hit from a 250-pound NFL linebacker, or a torn meniscus suffered playing catch with a grandchild, Maiers approaches each injury with the goal of helping his patients get back to what they love to do.

“You look at each patient, whether it’s an elite athlete or a weekend warrior, and you’re trying to identify the problem and really tailor the treatment to whatever their goals are,” Maiers said. “In terms of the level of care, we’re still offering the same options, but elite athletes will often choose a (certain) path because of their goals.”

The Colts appointed Maiers, a Carmel resident, as head team physician this summer to replace Dr. Thomas Klootwyk, who stepped down after five years in the role. Klootwyk, who is still working with the Colts as a consultant, said he will miss many aspects of the job but looks forward to spending more time with his family during the fall.

“It just felt like this is the right time to step aside and let the younger, stronger, faster guys take over and do the job they need to do,” Klootwyk said. “It was the toughest professional decision I’ve made.”

Maiers has worked as a Colts team physician for four years and consulted with the team eight years before that, so he is prepared for a busy fall.

As head team physician, Maiers attends all Colts matchups – home and away – to assess and treat injuries on game day. But the majority of his work with the team happens throughout the rest of the week as he works with players trying to get back on the field and team officials determining lineups.

On top of all that, he maintains his regular practice at Forté Sports Medicine and Orthopedics in Carmel.

Maiers spent much of his childhood in Indiana, graduating from Homestead High School in Fort Wayne. A lifelong sports fan, he grew up playing “a little of everything” (including football, baseball, hockey, rugby, volleyball and golf) but wasn’t “great at anything” on the field, he said.

His work with athletes began before he even finished his residency and fellowship, as he spent time on the sidelines and in locker rooms with high school teams. Since then, he has worked with Hamilton Southeastern Schools, Hanover College and Indiana University. Besides his role with the Colts, he is also the team physician for Brebeuf Jesuit High School.

“Being involved with the Colts is great and a tremendous honor, but I’ve taken care of athletes my entire career,” Maiers said. “That’s my passion, being able to take care of athletes and help them get back to doing the thing that they love.”

When he’s not working with the Colts or his other patients, Maiers, his wife and their three sons enjoy sailing, golfing and snow skiing together. 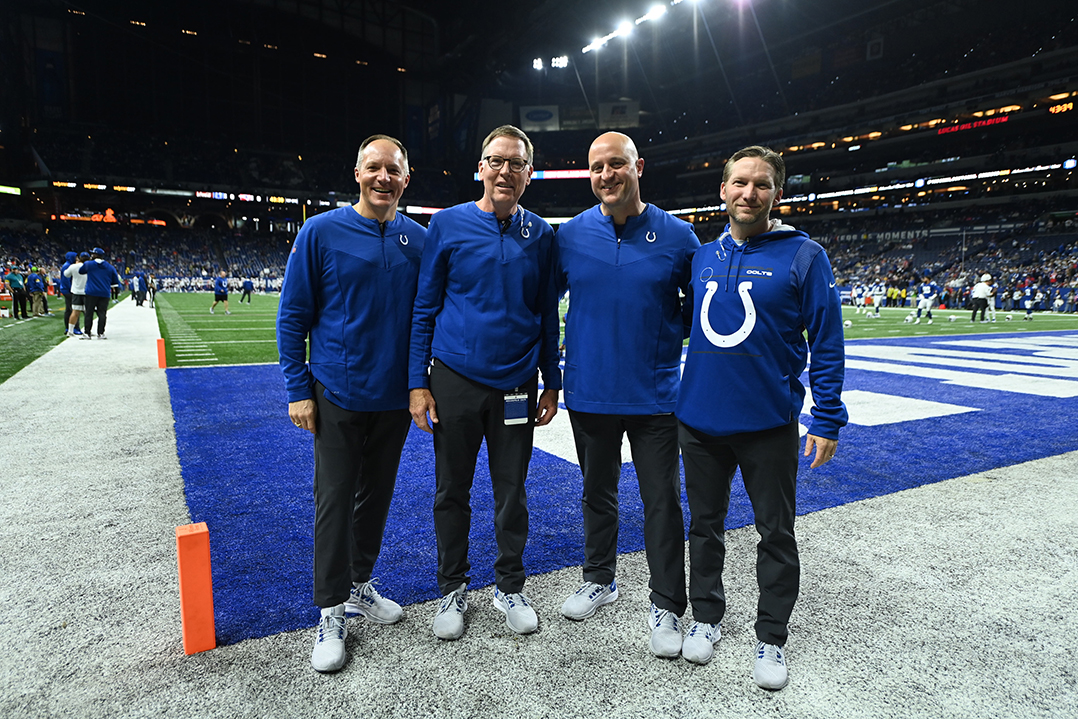 Maiers, who specializes in the hip and knee, began working with NFL-caliber players soon after joining Methodist Sports Medicine (which recently changed its name to Forté) approximately 15 years ago when Dr. Arthur Rettig, then-head team physician, asked him to assist at the NFL Scouting Combine.

“From a sports medicine perspective, taking care of professional football (players) is a very fulfilling way to practice medicine,” Maiers said. “It presents you with unique pathology and unique challenges.”

Maiers said he and his team feel the weight of their responsibility to inform players about their injuries and the risks of playing through them – which can be a difficult conversation to have, especially as football fans.

“It’s a challenge, because we want – as much as anybody else in the organization – for them to win. You have to make those hard choices, and it’s something we don’t take lightly,” he said. “I’ve been very fortunate to learn from people like Dr. Klootwyk on how to manage that. That’s part of what the art of sports management is.”

A week in the life of an NFL head team physician

Sunday – Arrive at stadium a couple of hours before game, assess injuries during and after game, communicate results to team officials, travel home if on the road

Monday – Complete and review scans not done on game day, check on players injured on game day or those feeling sore following the game, develop treatment plans for injured players

Saturday – If Colts on the road, travel to city hosting game in afternoon

Throughout the week, the doctors also treat regular patients at their practice.