You are at:Home»Current in Carmel»Carmel Cover Stories»Preserving the past: Documents, photos from Carmel author’s unlikely interviews with Betty Ford donated to presidential library

When editors at the South Bend Tribune told part-time entertainment writer Mary Eckard that she and her friend and business partner, Carol Joers, didn’t have enough journalism experience to write a weekly column for the paper, they decided to change that – in a big way.

So, Eckard and Joers decided to see if they could land an interview with Betty Ford, whose husband was often making national headlines at the time. It was 1973, and U.S. Rep. Gerald Ford was in the midst of being interviewed by Congress to be appointed vice president after the resignation of disgraced Spiro Agnew.

Much to their surprise, Betty Ford said yes. Thus began an unexpected journey that took the friends across the U.S. as they pieced together the article and developed a rapport with Betty Ford, who would become the first lady after the resignation of President Richard Nixon in 1974.

Nearly 50 years later, Eckard closed another chapter in the adventure by traveling to Grand Rapids, Mich., last month to donate her notes, photos and other artifacts from her interactions with Betty Ford to the Gerald R. Ford Presidential Library & Museum.

It wasn’t easy letting go of this memorable slice of her life, said Eckard, a meticulous organizer.

“I don’t want it lost in history,” said Eckard, a Carmel resident and Clay Township board member.

The donated materials will be a valuable resource for those studying U.S. politics of the mid-1970s, according to Geir Gunderson, supervisory archivist at the library.

“The interview transcripts, in particular, will be of interest to researchers as they present in Betty Ford’s own words her insights on a range of topics, including the life of a Congressman’s wife, the social issues of the day, and the events that were quickly transforming her life and that of her family,” Gunderson stated. “The donated materials also tell the interesting and entertaining story behind the interview and how Mary Eckard and Carol Joers connected with Mrs. Ford during a chaotic time.” 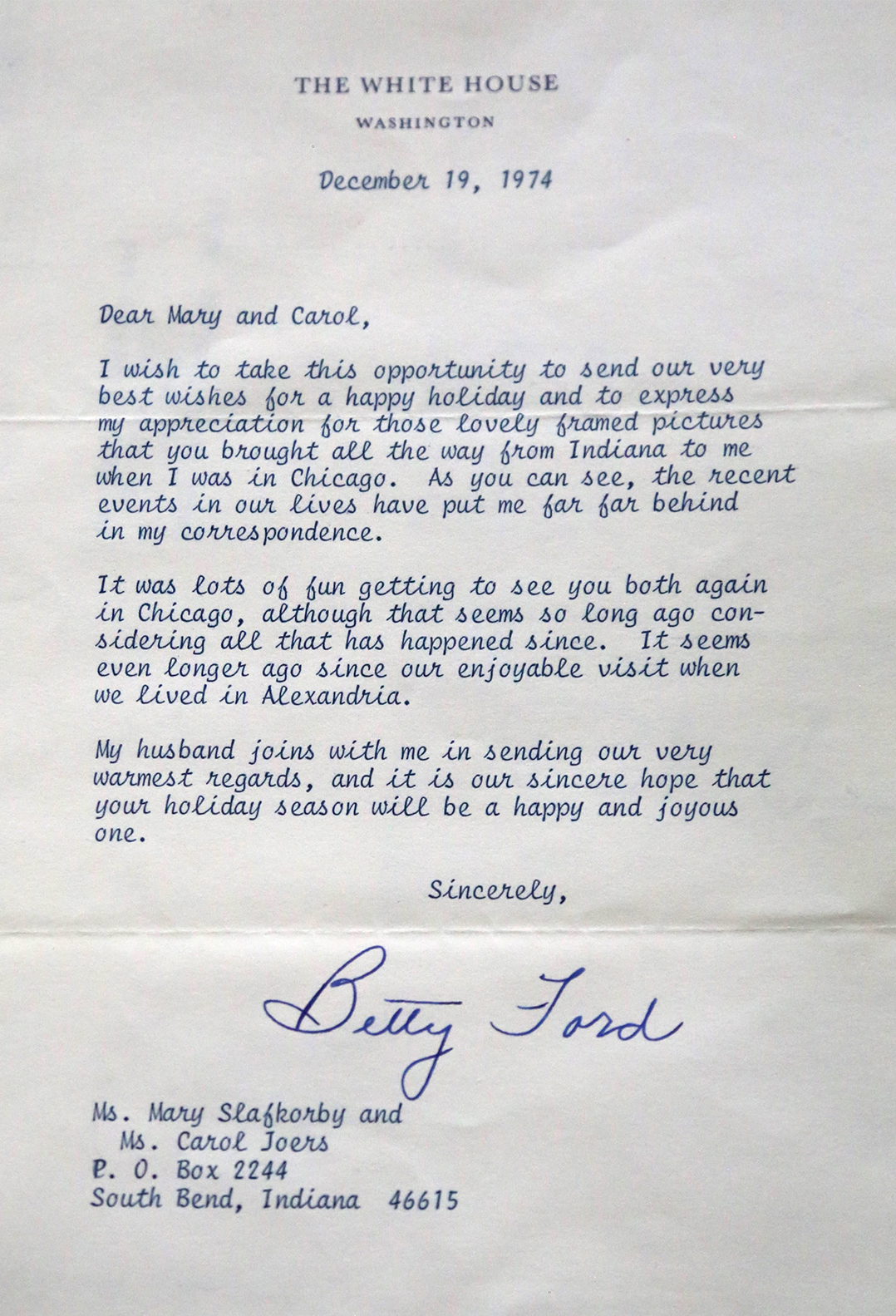 First Lady Betty Ford sent a holiday greeting and note of thanks in 1974 to Mary Eckard and Carol Joers, who had written a story about her the previous year for the South Bend Tribune. (Photo by Ann Marie Shambaugh)

‘She couldn’t have been more lovely’

Eckard and Joers met through their children, who attended school in South Bend together. The women co-owned a wedding planning firm, and they wanted to garner publicity about the industry and their business by writing a weekly newspaper column addressing questions and concerns about weddings.

They had limited journalism experience in 1973, but Eckard had worked in sales and figured that it wouldn’t hurt to pick up the phone and “go big” in trying to land an interview.

“We didn’t have any experience going looking for celebrities, and that wasn’t the point of it,” Eckard said. “We thought (Betty Ford) would be very interesting. She really hadn’t had a lot of press, and if we wrote a good story, we’d be able to market it and the South Bend Tribune would believe in us.”

Eckard and Joers, who died in 2005, initially interviewed Betty Ford during a 30-minute phone call. They concluded by asking if they could travel to Washington, D.C., to take photos to use with the story, and Betty Ford agreed. At the time, Congress was in the process of interviewing Gerald Ford in advance of a vote to appoint him as vice president.

In late November 1973, the women flew to the nation’s capital and traveled to the Ford’s home in nearby Virginia with their photographer, Jim Evans, whom they hired sight unseen based on a recommendation from a friend. Their meeting with Betty Ford was scheduled to last 20 minutes.

“She couldn’t have been more lovely or cordial,” Eckard said. 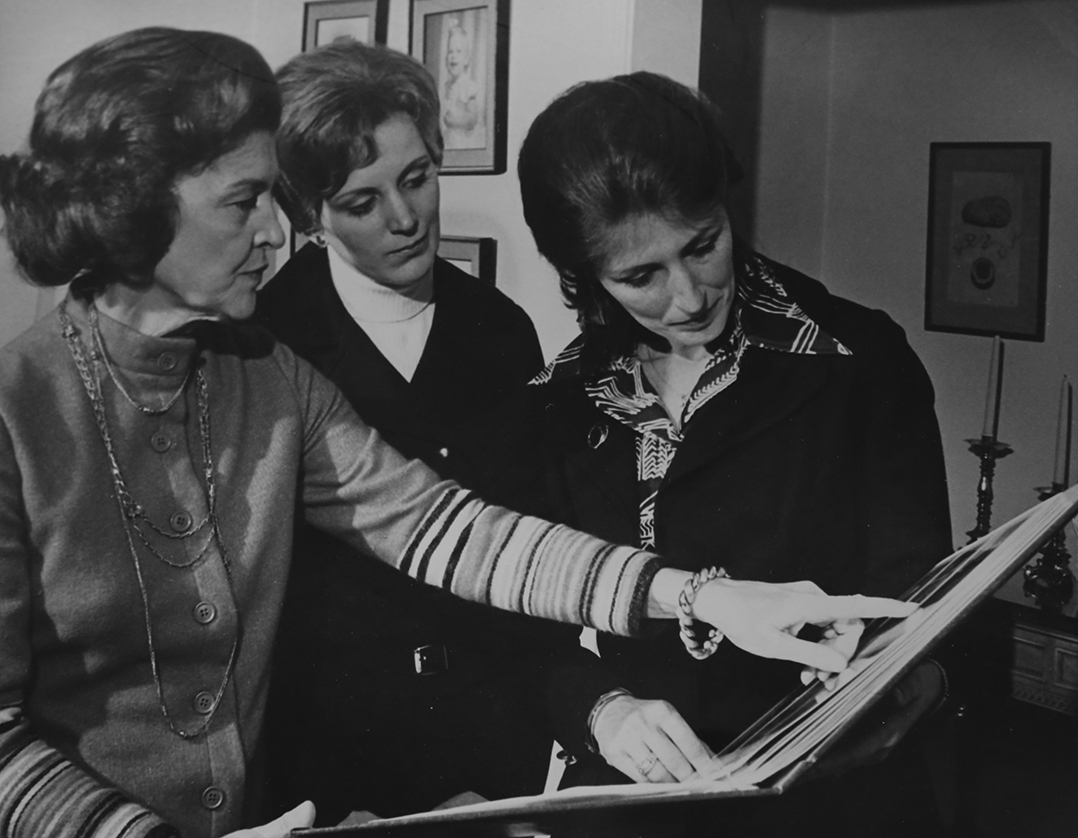 From left, Betty Ford, wife of then-U.S. Rep. Gerald Ford, shows a scrapbook to Mary Eckard and Carol Joers during an interview on Nov. 30, 1973. Eckard and Joers conducted the interview for a story later published in the South Bend Tribune. (Photo by Jim Evans)

Declining a flight on Air Force One

The South Bend Tribune published the story by Eckard and Joers, who used the name Mary Carol for their work, on Dec. 30, 1973.

The following year, Eckard and Joers reached out to Betty Ford’s office for a follow-up interview, as she had become the first lady in August 1974 after President Richard Nixon’s resignation. Now navigating a much busier schedule, Betty Ford said she could squeeze in an interview during a flight to Chicago aboard Air Force One.

Much to their chagrin, Eckard and Joers turned down the offer to fly aboard the nation’s most famous plane, as they could not justify purchasing airline tickets to Washington, D.C., to fly right back to the Midwest. So, the women drove to the event in Chicago. They received press credentials and briefly reconnected with Betty Ford but didn’t end up writing another story.

But by that time, the women had already achieved their goal. The South Bend Tribune began regularly publishing the “Marriage Maze” column by Mary Carol soon after it ran the feature on Betty Ford.

Looking back, Eckard is still surprised by what transpired through a simple phone call.

“I think that’s the hardest thing in life to learn, is that you do have permission to ask the question. If they say no, then you don’t hound them. We wouldn’t have gone on (with the story if Betty Ford said no),” Eckard said. “But it was the right moment at the right time with the right questions, and we were there.”

When Mary Eckard and Carol Joers interviewed Betty Ford in November 1973, they could tell something wasn’t quite right.

“We knew when we saw her that she had some medical problem of some kind, but we did not realize the problem she had,” Eckard said. “She was very precise and very slurred, but very real.”

Eckard and Joers decided not to question Ford about her health, because that was not relevant to their story. But in 1978, it became a national story when the former first lady announced that she was seeking treatment for addiction to alcohol and prescription drugs.

Ford overcame her dependency and became an advocate for others facing the same struggle, founding the Betty Ford Center in Rancho Mirage, Calif., in 1982 as a treatment center for those battling addiction.

“It became something that was good rather than bad,” Eckard said. “I admired her tremendously for that, to take a step forward and say, ‘I have a problem.’”