The Marching Millers are ready to stir some emotions with youthful and hopefulness among attendees as they prepare to march toward “A Million Dreams” this season.

The 163-member marching band at Noblesville High School is focusing on its theme of “A Million Dreams” from the movie “The Greatest Showman,” said Eric Thornbury, band director. Thornbury said the show will incorporate recordings from a sixth-grade choir and plans to use answers submitted by Noblesville students based off the line, “If you could live in a world you design.”

Thornbury said spectators who watch the performance of “A Million Dreams” will see the field transformed into a galaxy featuring a giant globe that opens and closes, stars and sun reflectors that represent the sun and the moon. The show is based off the opening theme in the movie of P.T. Barnum and his wife, who dreamed about the world they could make, Thornbury said.

The Marching Millers are led by drum majors Mikaela Westlund, Alden Ruth and Evan Reiss. Westlund, a senior who is in her fourth year with the marching band, said she and her fellow drum majors help guide students through the show as part of their roles.

“There’s definitely a lot of communication that happens from the box and the podium,” Westlund said.

Westlund said she is pleased at the progress the band has made so far regarding the upcoming season.

“I think the band is doing great and they’re really taking their time and preparing and we’re really farther, I think, than where we’ve been in the past,” she said. “It’s going to be a good season.”

But preparation doesn’t happen overnight. Thornbury noted that students begin training in the spring and then progress to summer camp, where individuals go through eight-hour days getting ready for the fall marching band season.

“When we are rehearsing, it’s long days, 10 days of band camp, but they’re moving along,” Thornbury said. “They’ve got three-fourths of the show learned.”

The Marching Millers are looking to continue their success as students competed in the Indiana State School Music Association Field Show Competition in Open Class A starting in 2019. In 2021, the marching band celebrated being named a field show Open Class A state finalist for the first time in the program’s history, according to the Noblesville Band website.

The Marching Millers also marked their first ISSMA state final appearance last year as well, and Thornbury is optimistic about this season.

“I think there’s a lot of expectations, competitively, and I always tell the students we can’t control or judge, but all we can control is ourselves,” Thornbury said. “We get better every day and we try to be as good as we can.”

But winning isn’t everything for the longtime educator, who is marking 30 years of directing bands this year and is in his 12th year at Noblesville.

“We definitely go after a philosophy of we’d rather be memorable and a crowd favorite than placing,” Thornbury said. “We want people to be entertained, and I think when people see this show, there might be some tears, hopeful tears, and if we can pull that off, that’s a huge success.”

That sentiment was shared by Westlund, who said although winning awards is a tremendous bonus, being part of the band is more important.

“As long as the band is proud of what they’ve done, I’m proud of what they do, and so I think for me, it’s really just being happy with how we perform and being able to put it all out on the field,” Westlund said with a smile. 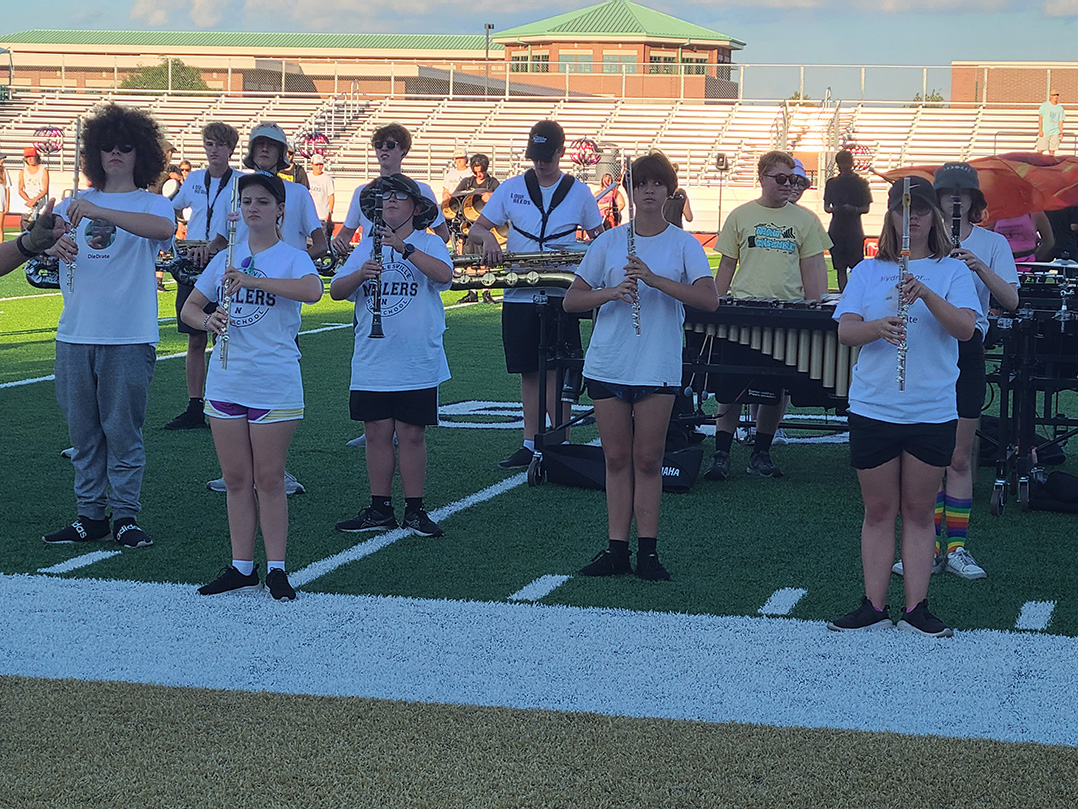 The Marching Millers prepare for their upcoming season during practice at Beaver Stadium in Noblesville. (Photo by Matthew Kent)

*Band will also perform at halftime at all Noblesville home football games on Sept. 9, Sept. 23 (Homecoming), Sept. 30 and Oct. 14