You are at:Home»Current in Zionsville»Zionsville Cover Stories»Happy trails: Zionsville resident, 94, discovered love of hiking at age 70

The 94-year-old Zionsville resident took up hiking as a hobby when she was 70. Nearly a quarter of a century later, she still tries to meet with fellow hikers and walk the trails in Zionsville.

“I don’t think it’s ever too late,” she said of trying new activities. “You can get up and walk around your block.” 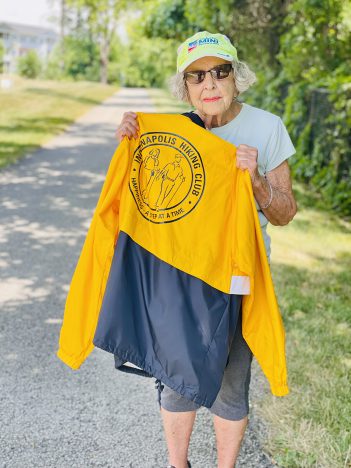 Joanne Applegate displays a jacket she received for hiking 1,000 miles in 2007. (Photo by Anna Skinner)

Applegate began hiking shortly after her husband Don Applegate died. The same year her husband died, the woman Applegate often walked with also passed away. Applegate then flew to Switzerland to meet a group of hikers organized through the Elderhostel, a nonprofit educational travel program now known as Road Scholar. She discovered she loved hiking and, upon returning to the states, joined the Indianapolis Hiking Club two years later in 1999 at age 72.

Applegate thought the club would present an opportunity to socialize and make friends.

She was right, and she has traveled around the world hiking with other hikers, who are now friends, she met in the club. She’s hiked with friends in France, England, Scotland and U.S. National Parks, among other areas. In 2007, she was recognized by the club for hiking 1,000 miles in a year. She has walked the Indianapolis Mini-Marathon seven times.

“The great thing about the hiking club is you don’t need a friend to go with,” she said. “New people are so welcome.”

Applegate said she enjoys the physical component of hiking, but the biggest benefit has been making friends.

“Those are the nicest people in the Indianapolis Hiking Club,” she said. “It’s been so good in my life.”

Applegate hikes less as she ages, but she said she’s doing well.

“I usually walk 2 miles with stops along the way,” she said.

“I hope it helps,” she said. “The thing about yoga that I like at this point in my life is, I can do as much as I can do. I don’t have to keep up with everybody. I can do whatever I’m able to do.”

Applegate’s daughter Julie Freccero lives in Larkspur, Calif., but speaks with her mother on the phone often. She said her mother is an inspiration.

“My mother came from very simple beginnings,” Freccero said. “I was in Zionsville a month ago and everyone I came across, young and old, told me how lucky they were to know my mom. I’ve lived 2,000 miles away from her for over 30 years, but we are so close. I count the minutes until I can call her every week. She’s kind, interesting, fun, extremely intelligent, independent and ever so wise.”

Freccero said her mother’s hobbies have kept her young.

“Her dedication to yoga and the hiking club, along with her positive attitude, have kept her healthy and young,” Freccero said. “She is truly an inspiration to so many people in so many ways.”

Throughout her time with the Indianapolis Hiking Club, Applegate has walked 14,000 miles. That’s roughly five times the distance between New York City and Los Angeles. 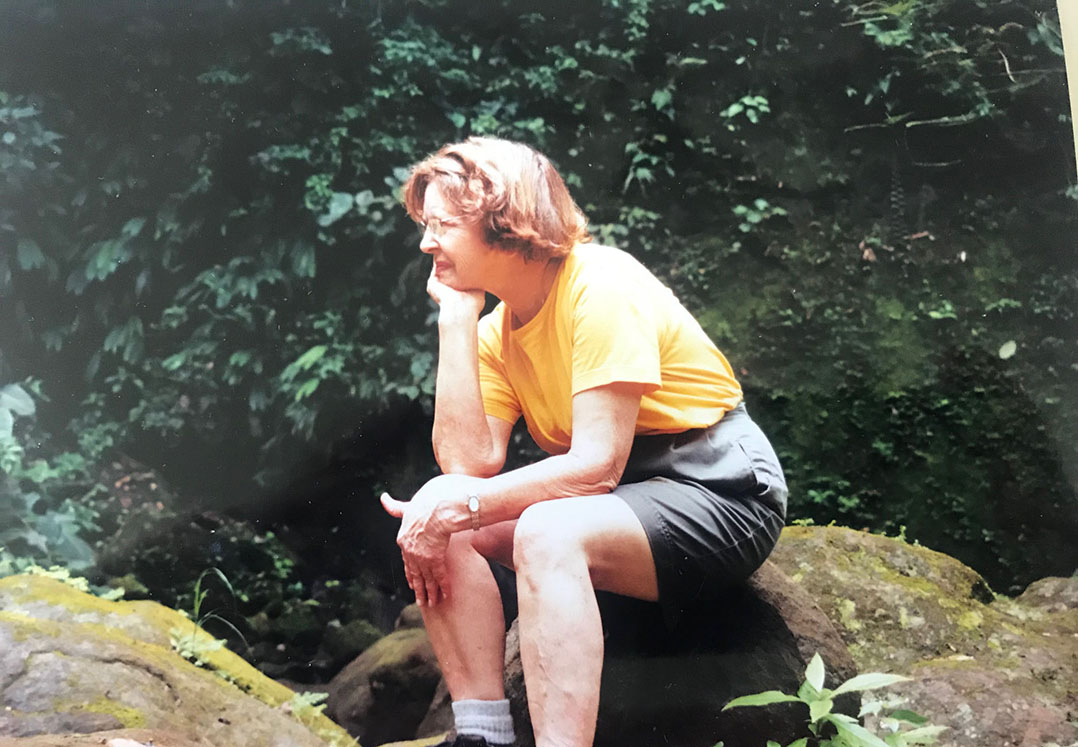 Joanne Applegate takes a break during a hike. She began hiking at age 70. (Photo courtesy of Julie Freccero)

Zionsville resident Joanne Applegate has traveled far and wide with her friends seeking opportunities to hike. She has been to Italy and taken two trips to England and France. She’s also traveled to Portugal, Switzerland, Wales, Scotland, St. John’s, Banff, Vancouver, Sedona, Colorado Springs and Glacier National Park, among other destinations. She hiked the Grand Canyon at age 86 and has hiked at most of Indiana’s state parks.